B is for Ballet 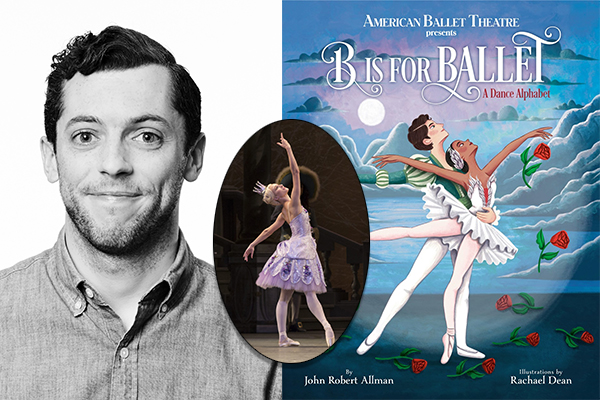 We're delighted to partner with the American Ballet Theater to celebrate the release of B IS FOR BALLET, an A-Z celebration of the world of ballet, from the renowned American Ballet Theatre. Joining us is John Robert Allman, author of B IS FOR BALLET, and Devon Teuscher, Principal Dancer, representing ABT as their ballerina for the event. A is for arabesque, B is for Baryshnikov, and C is for Coppélia in this beautifully illustrated, rhyming A-Z of ballet terminology, stars, dances, positions, creators, history, and more. This is a book that fans will adore, from children just starting ballet to adults who avidly follow this graceful artform.

ABOUT THE BOOK:
A is for arabesque, B is for Baryshnikov, and C is for Coppélia in this beautifully illustrated, rhyming A-Z of ballet terminology, stars, dances, positions, creators, history, and more. In partnership with the American Ballet Theatre, here is a book that fans will adore, from children just starting ballet to adults who avidly follow this graceful artform.
Written by the acclaimed author of A Is for Audra: Broadway’s Leading Ladies from A-Z, the dazzling, creative wordplay forms a graceful pas de deux with the stylish, swooping lines and rich color of the sumptuous illustrations, making this a highly giftable book to give to any dance fan. A glossary of terms, biographies, and dance history completes this beautiful and informational volume.

ABOUT THE AUTHOR:
John Robert Allman lives in New York City, where he works in marketing for television and theater. He is the author of A is for Audra: Broadway's Leading Ladies from A to Z and BOys Dance! He saw his first ballet, Ben Stevenson's Dracula, when he was seven. Follow him on Twitter and Instagram at @Johnny_Allman.

ABOUT THE BALLERINA:
Born in Pennsylvania, Devon Teuscher began her dance training at the age of nine under Deanna Doty of the Champaign Urbana Ballet Academy in Champaign, IL.  When her family moved to Vermont, she continued her training at the Vermont Ballet Theatre School in Essex, Vermont under the direction of Alex and Kirsten Nagiba.  At the age of eleven, Teuscher attended The Kirov Ballet Academy summer intensive.  She also attended the Pacific Northwest Ballet summer intensive on full scholarship for two years.

Teuscher joined ABT Studio Company in 2006 where she danced leading roles in Raymonda, Les Sylphides, Swan Lake, Sleeping Beauty, and various works by Jessica Lang.  She joined American Ballet Theatre as an apprentice in December 2007 and the corps de ballet in June 2008.   She became a Soloist in August 2014 and Principal Dancer in September 2017.

AMERICAN BALLET THEATRE is one of the greatest dance companies in the world. Revered as a national treasure since its founding season in 1940, its mission is to create, present, preserve, and extend the great repertoire of classical dancing for the widest possible audience. Headquartered in New York City, ABT is the only cultural institution of its size and stature to extensively tour, enchanting audiences for eight decades in 50 US states, 45 countries, and over 480 cities worldwide. ABT’s repertoire includes full-length classics from the nineteenth century, the finest works from the early twentieth century, and acclaimed contemporary masterpieces. In 2006, by an act of Congress, ABT became America’s National Ballet Company®. Find out more at ABT.org and follow ABT dancers at @abtofficial on Instagram, on Twitter at @ABTBallet, and on Facebook at @AmericanBalletTheatre.

B Is for Ballet: A Dance Alphabet (American Ballet Theatre) (Hardcover)

A is for Audra: Broadway's Leading Ladies from A to Z (Hardcover)