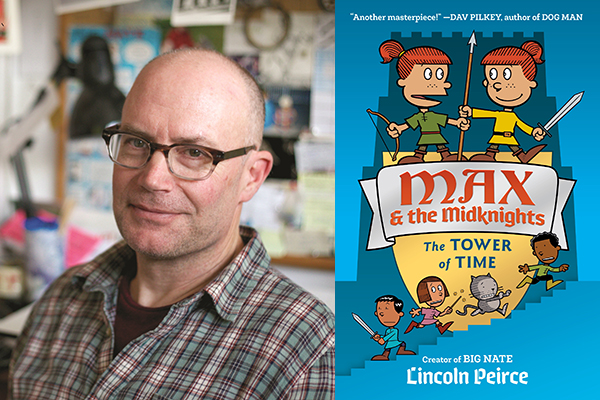 Hear ye, hear ye, all MAX AND THE MIDKNIGHTS fans! Lincoln Peirce, bestselling author and creator of the Big Nate series, joins us in a virtual event hosted by Jeff Kinney. Peirce and Kinney will chat about Max and the Midknights: The Tower of Time, the third entree in the hilarious Max and the Midknights series. Lincoln and Jeff are longtime friends, so this is sure to be an unforgettable event with tons of laughs. Save your spot in the free event below!

Purchase a signed copy of Max and the Midknights: The Tower of Time, while supplies last, below.

ABOUT THE BOOK:
From the creator of the Big Nate series comes the third Max and the Midknights adventure!

Everyone's favorite knight-in-training is back...to back! Max's twin is public enemy number one, and it's up to the Midknights to find her before time runs out! But dangers loom, including bloodthirsty trolls, murderous pirates, and even a ruthless king--or two.

Can Max and her band of loyal friends unlock the mystery of her past? Lincoln Peirce pens another epic quest in The Tower of Time, book three in the New York Times bestselling Max & the Midknights series.

Lincoln Peirce is a New York Times bestselling author and cartoonist. His comic strip Big Nate appears in over 400 newspapers worldwide and online at gocomics.com/bignate. In 2010, Lincoln introduced the self-styled “king of detention” to a new generation of young readers as a series of illustrated novels. In the past ten years, over twenty million Big Nate books have been sold, and Nickelodeon has created an animated series based on the character.

Max and the Midknights and Battle of the Bodkins, Lincoln’s instant New York Times bestselling novels for Crown Books for Young Readers, originated as a spoof of sword and sorcery tales. The Tower of Time reunites Max and her friends for a rollicking time-travel saga.

Lincoln and his wife, Jessica, have two children and live in Portland, Maine.