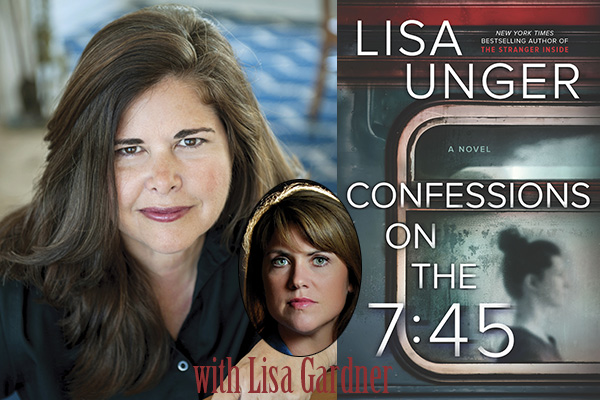 Hardly in need of an introduction, internationally bestselling and award-winning author Lisa Unger always delivers. Lisa returns to An Unlikely Story, virtually this time, with another darkly delicious page turner—tempting and oh so devourable.  In Unger’s best novel yet, CONFESSIONS ON THE 7:45 takes fans for a thrilling ride reminiscent of the classic Strangers on a Train. Perfect for readers of Paula Hawkins and Karin Slaughter, this riveting psychological suspense begins with a chance encounter on a commuter train and shows why you should never, ever make conversation with strangers. However, Lisa will NOT be in conversation with a stranger, but with fellow bestselling mystery author, Lisa Gardner! They'll be talking about building a mystery, answering audience questions, and even playing Two Truths and a Lie!

ABOUT THE BOOK:
Selena Murphy is commuting home from her job in the city when the train stalls out on the tracks. She strikes up a conversation with a beautiful stranger in the next seat, and their connection is fast and easy. The woman introduces herself as Martha and confesses that she's been stuck in an affair with her boss. Selena, in turn, confesses that she suspects her husband is sleeping with the nanny. When the train arrives at Selena's station, the two women part ways, presumably never to meet again. But days later, Selena's nanny disappears. Soon Selena finds her once-perfect life upended. As she is pulled into the mystery of the missing nanny, and as the fractures in her marriage grow deeper, Selena begins to wonder, who was Martha really? But she is hardly prepared for what she'll discover. Expertly plotted and reminiscent of the timeless classic Strangers on a Train, Confessions on the 7:45 is a stunning web of lies and deceit, and a gripping thriller about the delicate facades we create around our lives.

ABOUT THE AUTHOR:
Lisa Unger is the New York Times and internationally bestselling author of eighteen novels, including CONFESSIONS ON THE 7:45 (Oct. 2020). With millions of readers worldwide and books published in twenty-six languages, Unger is widely regarded as a master of suspense. Her critically acclaimed books have been voted "Best of the Year" or top picks by the Today show, Good Morning America, Entertainment Weekly, Amazon, IndieBound and others. Her essays have appeared in The New York Times, Wall Street Journal, NPR, and Travel+Leisure. She lives on the west coast of Florida with her family.

ABOUT LISA GARDNER:
Lisa Gardner is the #1 New York Times bestselling author of twenty suspense novels, including The Neighbor, which won Thriller of the Year from the International Thriller Writers. An avid hiker, traveler, and cribbage player, she lives in the mountains of New Hampshire with her family.

Confessions on the 7:45: A Novel (Hardcover)

Sign Up Now
For Email Marketing you can trust.