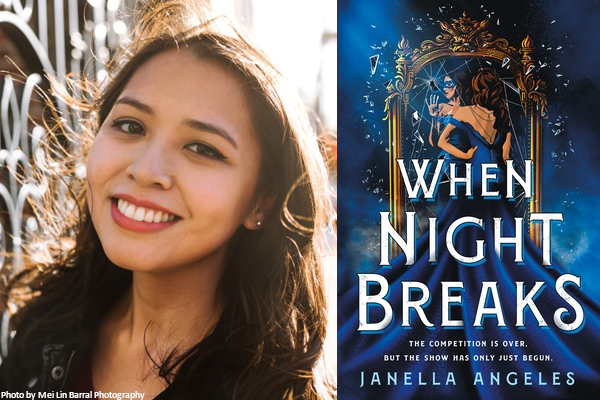 Join Janella Angeles, bestselling Massachusetts author of the KINGDOM OF CARDS duology, in this virtual event where she will discuss the second and final book in the series, WHEN NIGHT BREAKS.  In this dramatic last act, the truth will come out, a kingdom must fall, hearts will collide, and the show comes to a spectacular end. Janella will be in conversation with Susan Dennard, award-winning author of the WITCHLAND series. Save your spot in the free event below.

Attendees who order WHEN NIGHT BREAKS from An Unlikely Story on or before October 6th will receive a personalized copy of the book, a double-sided bookmark, and a WHEN NIGHT BREAKS playbill designed by Alexis Castellanos, while supplies last. Please be sure to include the name of whom you'd like your book inscribed to in the "order comments" when checking out on our website. Please note we can only ship in the US and Canada.

ABOUT THE BOOK:
In Janella Angeles's When Night Breaks, the dramatic last act of the Kingdom of Cards duology, the stage is set, the spectacle awaits… and the show must finally come to an end.

The competition has come to a disastrous end, and Daron Demarco’s fall from grace is front-page news. But little matters to him beyond Kallia, the contestant he fell for who is now missing and in the hands of a dangerous magician. Daron is willing to do whatever it takes to find her. Even if it means unearthing secrets that lead him on a treacherous journey, risking more than his life and with no promise of return.

After falling through the mirror, Kallia has never felt more lost, mourning everything she left behind and the boy she can’t seem to forget. Only Jack, the magician who has all the answers but can’t be trusted, remains at her side. Together, they must navigate a dazzling world where mirrors show memories and illusions shadow every corner, ruled by a powerful showman who’s been waiting for Kallia to finally cross his stage. But beneath the glamour of dueling headliners and never-ending revelry, a sinister force falls like night over everyone, with the dark promise of more—more power beyond Kallia’s wildest imagination, and at a devastating cost.

The truth will come out, a kingdom must fall, hearts will collide.

And the show must finally come to an end.

ABOUT THE AUTHORS:
JANELLA ANGELES is the Filipino-American bestselling author of Where Dreams Descend. She got her start in writing through consuming glorious amounts of fanfiction at a young age—which eventually led to creating original stories of her own. She currently resides in Massachusetts where she works in the business of publishing books on top of writing them, and is most likely to be found listening to musicals on repeat while daydreaming too much for her own good.

Susan Dennard is the award-winning, New York Times bestselling author of the Witchlands series (now in development for TV from the Jim Henson Company), the Something Strange and Deadly series, and the upcoming Luminaries series, as well as various short stories and other tales across the internet. She also runs the popular newsletter for writers, Misfits and Daydreamers. When not writing or teaching writing, she can be found rolling the dice as a Dungeon Master or mashing buttons on one of her way too many consoles. Originally from Georgia, she earned advanced degrees in marine ecology and statistics while also traveling the world. She now lives near Lake Michigan with her French husband, très mignonne daughter, and a veritable zoo of aging pets.

Where Dreams Descend: A Novel (Kingdom of Cards #1) (Paperback)