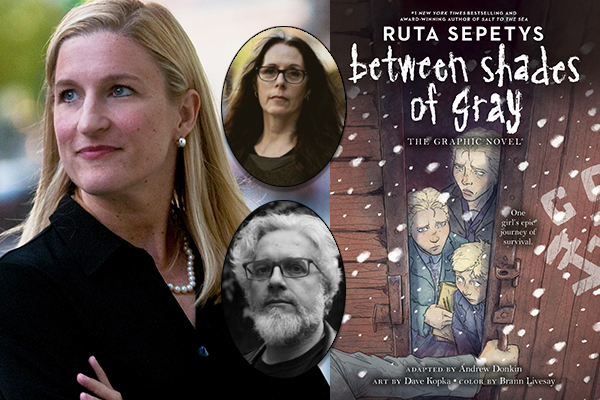 Ruta Sepetys's award-winning novel BETWEEN SHADES OF GRAY has been transformed into a gorgeous graphic novel, and we're celebrating with a once-in-a-lifetime event with Ruta Sepetys, Andrew Donkin, and Laurie Halse Anderson. During this event, these YA creators will discuss books being adapted into graphic novels, in what's sure to be an exciting conversation.

All copies of BETWEEN SHADES OF GRAY will come with a bookplate signed by Ruta.

We're offering 15 VIP tickets that will include a one-on-one onscreen chat with Ruta Sepetys immediately following the event. There is no extra charge for this ticket, however, timing is limited. You'll receive a separate link to access the Virtual Meet & Greet the day of the event.

***Please add DOMESTIC SHIPPING to your ticket if you're not able to pick up your book at An Unlikely Story in Plainville, MA. Your book will not be mailed to you if you don't choose to have it shipped.
We highly recommend using a computer, not a cellphone to purchase your tickets.***

Just in time for the 10th anniversary of Between Shades of Gray, Ruta Sepetys's award-winning debut novel, and inspiration for the major motion picture Ashes in the Snow, is now a gorgeous graphic novel!

From #1 New York Times and international bestselling author and Carnegie Medal winner of Salt to the Sea comes a story of loss and of fear--and ultimately of survival--in a brand-new four-color format.

"Few books are beautifully written, fewer still are important; this novel is both." --The Washington Post

June, 1941. A knock comes at the door and the life of fifteen-year-old Lina Vilkas changes forever. She's arrested by the Soviet secret police and deported from Lithuania to Siberia with her mother and younger brother. The conditions are horrific and Lina must fight for her life and for the lives of those around her, including the boy that she loves. Risking everything, she secretly passes along clues in the form of drawings, hoping they will reach her father's prison camp. But will her messages, and her courage, be enough to reunite her family? Will they be enough to keep her alive?

A moving and haunting novel perfect for readers of The Book Thief, now available as a stunning graphic novel.

Ruta Sepetys (rutasepetys.com) is an internationally acclaimed, #1 New York Times bestselling author of historical fiction published in over sixty countries and forty languages. Sepetys is considered a "crossover" novelist, as her books are read by both teens and adults worldwide. Her novels Between Shades of Gray, Out of the Easy, Salt to the Sea, and The Fountains of Silence have won or been shortlisted for more than forty book prizes, and are included on more than sixty state award lists. Between Shades of Gray was adapted into the film Ashes in the Snow, and her other novels are currently in development for TV and film. Winner of the Carnegie Medal, Ruta is passionate about the power of history and literature to foster global awareness and connectivity. She has presented to NATO, to the European Parliament, in the United States Capitol, and at embassies worldwide. Ruta was born and raised in Michigan and now lives with her family in Nashville, Tennessee. Follow her on Instagram @RutaSepetysAuthor and on Facebook at facebook.com/rutasepetys.

Andrew Donkin (andrewdonkin.com) has sold over ten million graphic novels, children’s books, and adult books worldwide. His graphic novel Illegal (co-written with Eoin Colfer) was a bestseller in the USA and UK and has won or been nominated for over forty book awards. He has long been interested in the issue of refugees and displaced people. He has written for many global franchises, including Batman, Superman, Doctor Who, and Artemis Fowl. Andrew lives near the river Thames in London with his family. You can follow Andrew on Twitter and Instagram @andrewdonkin.

Laurie Halse Anderson has received both the Margaret Edwards Award and the ALAN Award for her contributions to young adult literature. She has also been honored by the National Coalition Against Censorship in recognition of her fight to combat the censoring of literature. She is the author of the groundbreaking National Book Award finalist and Printz Honor Book Speak. She is also author of the critically acclaimed YA books Prom, Twisted, Catalyst, Wintergirls, and The Impossible Knife of Memory. She has also authored a number of middle grade titles including The Vet Volunteers series, and the historical fiction Seeds of America Trilogy, which includes Forge, ALA Best Book for Young Adults Fever 1793, and the National Book Award finalist and Scott O’Dell Award-winner Chains. She and her husband live in northern New York State. Follow Laurie on Twitter @halseanderson and visit her at madwomanintheforest.com.