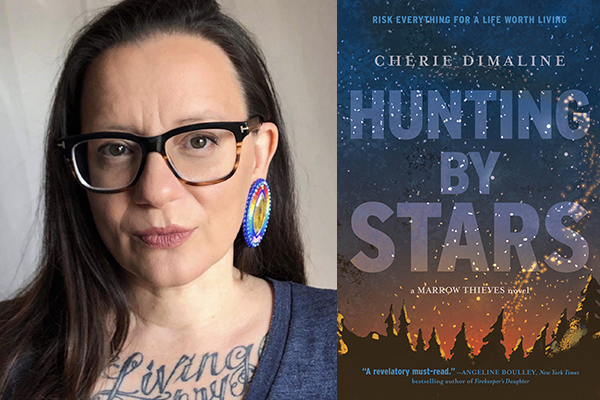 Internationally bestselling author Cherie Dimaline joins us virtually to introduce her thrilling new YA novel, HUNTING BY STARS, the hotly anticipated sequel to THE MARROW THIEVES. Cherie's 2017 book, THE MARROW THIEVES was declared by TIME magazine, one of the Best YA Books of All Time, received multiple starred reviews and awards, including the Governor General’s Literary Award and NPR Book of the Year. HUNTING BY STARS takes place in a dystopian world where the Indigenous people of North America are being hunted for their bone marrow and ability to dream. It’s a smart, provocative YA that tackles big, real-world questions in fantastical—yet all too realistic—ways. Fans of THE MARROW THIEVES will be thrilled to see their favorite characters return, but HUNTING BY STARS is a new story that will captivate fans and new readers alike. Cherie will discuss her new YA novel with Tommy Orange, national bestselling author of THERE THERE. Save your spot in the free event below!

Cherie has kindly signed bookplates and created an enamel pin for everyone purchasing her new book from An Unlikely Story while supplies last.

ABOUT THE BOOK:
From the acclaimed author of The Marrow Thieves comes a thrilling new story about hope and survival that New York Times bestselling author Angeline Boulley called “a revelatory must-read”

Years ago, when plagues and natural disasters killed millions of people, much of the world stopped dreaming. Without dreams, people are haunted, sick, mad, unable to rebuild. The government soon finds that the Indigenous people of North America have retained their dreams, an ability rumored to be housed in the very marrow of their bones. Soon, residential schools pop up—or are re-opened—across the land to bring in the dreamers and harvest their dreams.

Seventeen-year-old French lost his family to these schools and has spent the years since heading north with his new found family: a group of other dreamers, who, like him, are trying to build and thrive as a community. But then French wakes up in a pitch-black room, locked in and alone for the first time in years, and he knows immediately where he is—and what it will take to escape.

Meanwhile, out in the world, his found family searches for him and dodges new dangers—school Recruiters, a blood cult, even the land itself. When their paths finally collide, French must decide how far he is willing to go—and how many loved ones is he willing to betray—in order to survive. This engrossing, action-packed, deftly-drawn novel expands on the world of Cherie Dimaline’s award-winning The Marrow Thieves, and it will haunt readers long after they’ve turned the final page.

ABOUT THE AUTHORS:
Cherie Dimaline is an author from the Georgian Bay Métis Community in Canada. Her 2017 book, THE MARROW THIEVES, won the Governor General’s Award and the prestigious Kirkus Prize for Young Readers, among others. THE MARROW THIEVES was named a Book of Year on numerous lists, including the National Public Radio, the School Library Journal, the New York Public Library, the Globe and Mail, Quill & Quire, and the CBC, has been translated into several languages, and continues to be a Canadian national bestseller years later. Cherie lives in Canada, where she is adapting work for stage and film and working on her new novels.

Tommy Orange is a graduate of the MFA program at the Institute of American Indian Arts. An enrolled member of the Cheyenne and Arapaho Tribes of Oklahoma, he was born and raised in Oakland, California.