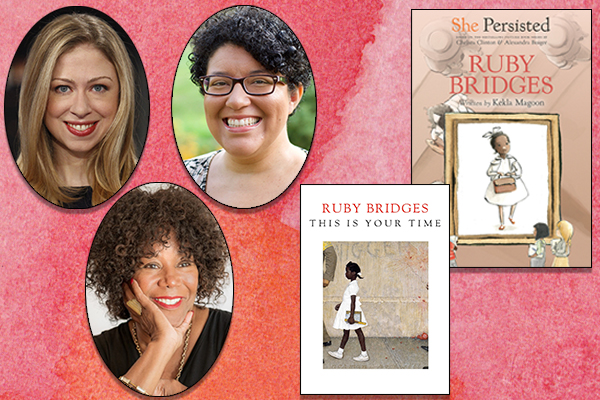 We're beyond honored to virtually welcome Chelsea Clinton, Kekla Magoon and Ruby Bridges in conversation with Jeff Kinney for an inspiring conversation and Q&A where they will discuss SHE PERSISTED: RUBY BRIDGES, the eighth nonfiction book in the chapter book series inspired by Chelsea Clinton’s SHE PERSISTED. Viewers can submit questions through the chat during the live event, and we'll get to as many as time allows.

As part of this event, we're welcoming attendees to purchase an additional copy to be donated to Title I schools in our community. We'd love to put these books in the hands of as many readers as possible! If you're purchasing a book (or books) to be donated, please add a note in the comments section of your order. We'll adjust the shipping cost as needed when processing your order so you're not charged shipping for the books to be donated.

Chelsea Clinton is the author of the #1 New York Times bestselling picture book She Persisted: 13 American Women Who Changed the World, which was praised in a starred review by Publishers Weekly as a “lovely, moving work of children's literature [and a] polished introduction to a diverse and accomplished group of women." She is also the author of Grandma’s Gardens, co-written with Hillary Rodham Clinton, as well as the New York Times bestsellers She Persisted in Sports, Don’t Let Them Disappear; Start Now! You Can Make a Difference; She Persisted Around the World: 13 Women Who Changed History; It’sYour World: Get Informed, Get Inspired & Get Going!; The Book of Gutsy Women: Favorite Storiesof Courage and Resilience, co-written with Hillary Rodham Clinton; and Governing Global Health: Who Runs the World and Why?, co-written with Devi Sridhar. Chelsea Clinton is the Vice Chair of the Clinton Foundation, where she works on many initiatives including those that help to empower the next generation of leaders. She lives in New York City with her husband, Marc, their children, and their dog, Soren. You can follow her on Twitter at @ChelseaClinton or on Facebook at www.facebook.com/chelseaclinton.

Kekla Magoon (keklamagoon.com) writes novels and nonfiction for young readers, including The Highest Tribute: Thurgood Marshall's Life, Leadership, and Legacy, Today the World Is Watching You: The Little Rock Nine and the Fight for School Integration 1957-58, The Season of Styx Malone, and The Rock and the River. She has received the Boston Globe-Horn Book Award, an NAACP Image Award, the John Steptoe New Talent Award, three Coretta Scott King Honors, and been long listedfor the National Book Award. Kekla conducts school and library visits nationwide. She holds a B.A. from Northwestern University and an M.F.A. in Writing from Vermont College of Fine Arts, where she now serves on faculty. You can follow Kekla Magoon on Twitter@keklamagoon.

Ruby Bridges is a civil rights activist who, at the age of six, was the first black student to integrate an all white elementary school in New Orleans. She was born in Mississippi in 1954, the same year the United States Supreme Court handed down its landmark decision ordering the integration of public schools. Her family later moved to New Orleans, where on November 14, 1960, Bridges began attending William Frantz Elementary School, single-handedly initiating the desegregation of public education in New Orleans. Her walk to the front door of the building was immortalized in Norman Rockwell's famous painting The Problem We All Live With, in Robert Coles's book The Story of Ruby Bridges, and in the Disney movie Ruby Bridges. This Is Your Time is her first book in over twenty years, following the publication of her award- winning autobiography Through My Eyes.

This Is Your Time (Hardcover)