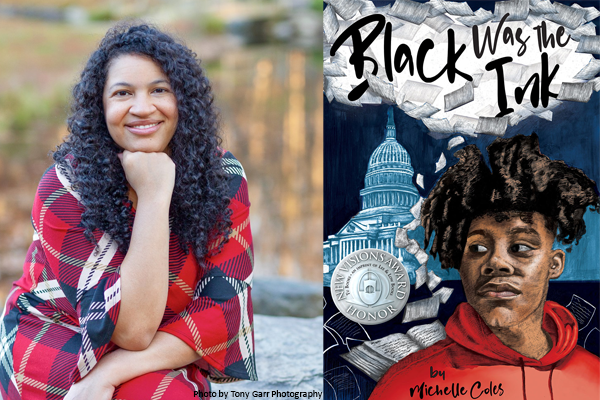 Join us in welcoming civil rights attorney and author Michelle Coles to our virtual stage! In this event, Michelle will discuss her debut young adult novel, BLACK WAS THE INK, about sixteen-year-old Malcolm who is sent on a journey through Reconstruction-era America to find his place in modern-day Black progress. Perfect for fans of Jason Reynolds and Nic Stone, and featuring illustrations by upcoming artist, Justin Johnson, Black Was the Ink is a powerful coming-of-age story and an eye-opening exploration of an era that defined modern America. This event is perfect for ages 13-17 and students, parents, and educators are invited to attend. If you're an educator and would like to broadcast this event to your classroom, please reach out to Lynda O'Brien at lynda@anunlikelystory.com by January 3rd for guidelines otherwise, register for the free event below.

Michelle has kindly signed bookplates for everyone purchasing BLACK WAS THE INK from An Unlikely Story, while supplies last.

ABOUT THE BOOK:
Through the help of a ghostly ancestor, sixteen-year-old Malcolm is sent on a journey through Reconstruction-era America to find his place in modern-day Black progress.

Malcolm Williams hasn't been okay for a while. He's angry and despondent and feels like nothing good ever happens for teens like him in D.C. All he wants is to be left alone in his room for the summer to draw or play video games--but no such luck. With growing violence in his neighborhood, his mother ships him off to his father's family farm in Mississippi, and Malcolm is anything but pleased.

A few days after his arrival, his great-aunt tells him that the State is acquiring the farm to widen a highway. It's not news Malcolm is concerned about, but someone plans to make it his concern. One minute Malcolm is drawing in the farmhouse attic, and the next he's looking through the eyes of his ancestor Cedric Johnson in 1866.

As Cedric, Malcolm meets the real-life Black statesmen who fought for change during the Reconstruction era: Hiram Revels, Robert Smalls, and other leaders who made American history. But even after witnessing their bravery, Malcolm's faith in his own future remains shaky, particularly since he knows that the gains these statesmen made were almost immediately stripped away. If those great men couldn't completely succeed, why should he try?

Malcolm must decide which path to take. Can Cedric's experiences help him construct a better future? Or will he resign himself to resentments and defeat?

Perfect for fans of Jason Reynolds and Nic Stone, and featuring illustrations by upcoming artist, Justin Johnson, Black Was the Ink is a powerful coming-of-age story and an eye-opening exploration of an era that defined modern America.

ABOUT THE AUTHOR:
Michelle Coles is an accomplished civil rights attorney and a proud alumna of the University of Virginia and Howard University School of Law. As a ninth-generation Louisianan, she is highly attuned to the struggles African Americans have faced in overcoming the legacy of slavery and the periods of government-sanctioned discrimination that followed. She hopes that by revealing oft-hidden Black history, her debut novel will empower young people with tools to shape their destiny. Find her on the web at michellecoles.com. Justin Johnson credits his mother and grandmother, both teachers, with inspiring his love of picture books and storytelling. He studied children's book illustration as well as animation at the Rhode Island School of Design, and now works as an illustrator, GIF animator, and aspiring art teacher. Justin lives in Washington, D.C. Find him on the web at justinjohnson.work or on Instagram as @the.k.in.cmyk.

Black Was the Ink (Hardcover)