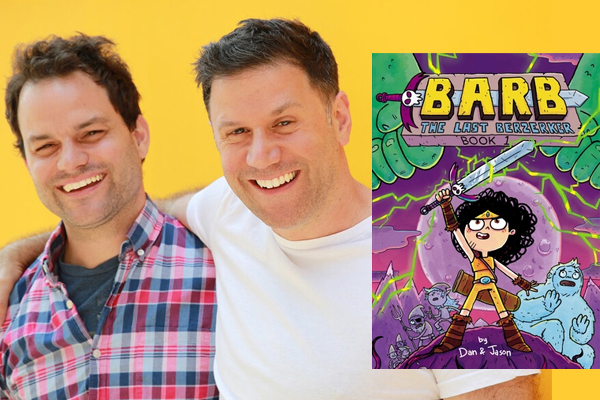 Hilarity will ensue in this virtual event with award-winning duo Dan Abdo and Jason Patterson. Join us in welcoming Dan and Jason to our virtual stage to discuss the first book in their new middle-grade graphic novel series BARB THE LAST BERZERKER. BARB is SHE-RA AND THE PRINCESS OF POWER meets Dav Pilkey’s DOG MAN. Barb is a young Berzerker who has to rescue her fellow warriors from the evil villain Witch Head before he destroys the world! Dan Abdo said that he landed on creating a female titular character because he wanted his daughters to have a “Luke Skywalker to look up to.” All middle-grade readers are sure to love BARB. Save your spot in the free event below.

ABOUT THE BOOK:
She-Ra and the Princesses of Power meets Dav Pilkey’s Dog Man in this sidesplitting graphic novel about a young Berzerker who has to rescue her fellow warriors from the evil villain Witch Head before he destroys the world!

Barb is a Berzerker, one of a group of warriors sworn to protect the land of Bailiwick from the scourge of monsters that plagues it. But the fearsome crew seem to have met their match in the nefarious Witch Head. Using power from his magical sword, he tricked the Zerks and took them captive. Only Barb was able to escape—and she took Witch Head’s Shadow Blade with her.

Now it’s up to Barb to free her fellow warriors so they can stop Witch Head from taking over Bailiwick. On the way, she’ll battle vampire goat fiends, snot goblins, and a giant with serious foot odor issues (but don’t mention that to him—he’s very sensitive about it). Luckily, she’s got her best friend, Porkchop the yeti, to help her.

But the power of the Shadow Blade has a mind of its own, and the deeper Barb gets into her quest, the harder it is to keep the blade’s awesome power under control.

ABOUT THE CREATORS:
For the past ten years, award-winning duo Dan Abdo and Jason Patterson have developed numerous animated campaigns, network TV and web series, and critically acclaimed commercial work. Their extensive portfolio has garnered them industry wide recognition, while their humorous sensibility and diverse skill set has landed them jobs for top global brands. Dan and Jason have set up properties at Twentieth Century Fox, Disney, and Nickelodeon as well as a feature animated film through Paramount Pictures. The well-versed storytellers have developed original content for a wide variety of platforms, including print (Nickelodeon Comics, The New Yorker), theater (Pilobolus), and digital.

Barb and the Ghost Blade (Barb the Last Berzerker #2) (Hardcover)