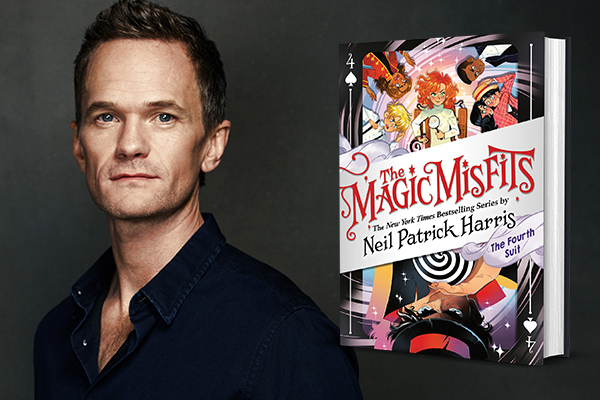 Beloved award-winning author, actor, and magician, Neil Patrick Harris, will join An Unlikely Story to introduce the fourth and final installment in the Magic Misfits series: MAGIC MISFITS: THE FOURTH SUIT. This isn't going to be just any virtual event - it's going to be MAGICAL! You may not know this, but Neil is a huge fan of magic, is a practicing stage magician, and was the President of the Academy of Magical Arts from 2011-2014. He has also performed magic on shows such as Top Chef Masters, Glee, and American Horror Story. Neil will be doing a moderated Q&A followed by pre-selected audience questions, followed by an exclusive magic show for this event only, with help from friends in the magic community.

ABOUT THE BOOK:
The Misfits must work together to fend off mysterious attacks in this magical finale to the #1 New York Times bestselling Magic Misfits series from acclaimed and wildly popular celebrity Neil Patrick Harris!

Ridley Larsen is everything you want in a friend. She's tough as nails, she's fiercely loyal, and she's smart as a whip. But she can be a harsh critic, which has put her position with the Magic Misfits on the rocks, even as the threat of the group's longtime enemy Kalagan looms large. Ever since his recent appearance in Mineral Wells, the kids know that a showdown with the vicious magician is imminent.

They must first deal with a series of odd instances and random attacks, though, all of which they use to bring themselves closer to discovering where Kalagan may be hiding, and the nature of his true identity. But can Ridley finally master her temper and put her essential magical skills to good use? She'll do anything to protect her friends, and when the time comes, she'll find that the Magic Misfits are strongest when they all work together.

Join the Magic Misfits as they discover adventure, friendship, and more than a few hidden secrets in this finale of the unique and always surprising series. Whether you're a long-time expert at illusion or simply a new fan of stage magic, hold on to your top hat!

ABOUT THE AUTHOR:
Neil Patrick Harris is an accomplished actor, producer, director, host, author, husband, and father of magical twins. Harris also served as President of the Academy of Magical Arts from 2011-2014. His memoir, Choose Your Own Autobiography, was a New York Times bestseller. The New York Times bestselling Magic Misfits series is his middle grade debut.