Amanda Lovelace: A Panel of Poets 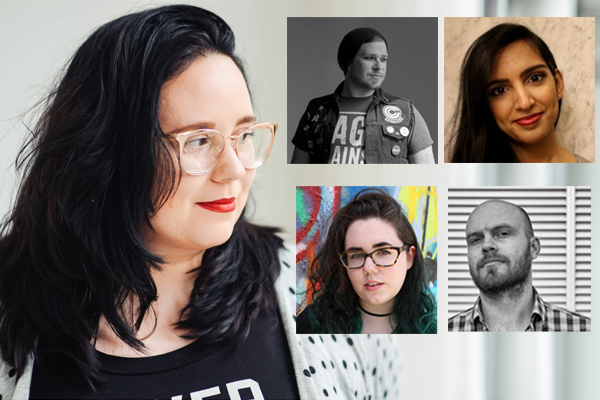 Poetry fans rejoice! We are celebrating Amanda Lovelace’s new poetry collection, THE MERMAID’S VOICE RETURNS IN THIS ONE, with not just one, but four other poets. Join Amanda, her pro-wrestler-turned-poet spouse, Cyrus Parker, Goodreads Choice Award winner Trista Mateer, Best of Net nominated poet Yena Sharma Purmasir, and Iain Thomas, author of the worldwide phenomenon I WROTE THIS FOR YOU, for a memorable poetry panel, followed by a signing.

ABOUT THE POETS:
Amanda Lovelace grew up a word-devourer & avid fairy tale lover; it was only natural that she would begin writing books of her own. When she isn't reading or writing, she can be found waiting for pumpkin spice coffee to come back into season and binge-watching Gilmore girls. (Before you ask: Team Jess all the way.) The lifelong poetess and storyteller currently lives in New Jersey with her spouse, their ragdoll cats, and a combined book collection so large it will soon need its own home. She is a two-time winner of the Goodreads Choice Award for best poetry as well as a USA TODAY & Publishers Weekly bestseller.

Cyrus Parker is a pro-wrestler-turned-poet hailing from a small town in New Jersey alongside wife and poetess Amanda Lovelace and their two ragdoll cats, Macchiato and Rosé. A self-described "big goth kid," Cyrus has an affinity for dark eyeshadow, dark clothes, enamel pins, and dropkicking the gender binary.

Trista Mateer is a poet from outside of Baltimore, who could be living anywhere by the time you read this. Known for her eponymous blog, she is also the author of four full length collections of poetry and won the Goodreads Choice Award in 2015 WITH THE DOGS I HAVE KISSED. She is currently working as a freelance editor but still manages to spend most of her time Googling cheap airfare and writing poetry about things that don't matter anymore.

Yena Sharma Purmasir is a Best of Net nominated poet and essayist from New York City. Her writing has been featured in Mask Magazine, Rising Phoenix Review, and Thought Catalog. She is the author of UNTIL I LEARNED WHAT IT MEANT and WHEN I'M NOT THERE.

Iain Thomas is a writer and new media artist. He is the author of several books, the most popular of which is I Wrote This For You. Originally an online verse and photography project, widely considered to be at the forefront of popular contemporary poetry, I Wrote This for You has gone on to became a worldwide phenomenon. When he’s not writing, drawing or working, he spends time with his family in the outdoors in Cape Town, South Africa.

the mermaid's voice returns in this one (Paperback)

When I'm Not There (Paperback)

Every Word You Cannot Say (Paperback)