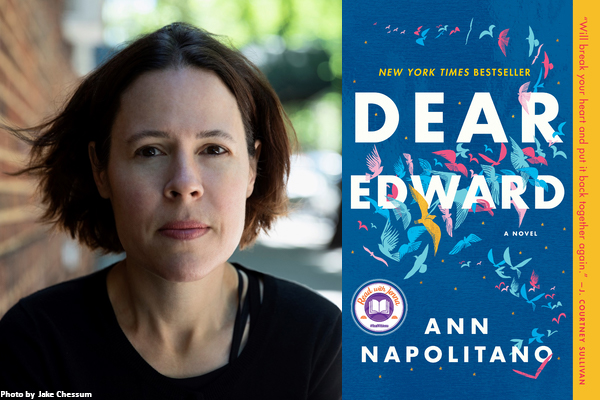 Celebrate the paperback release of the New York Times Bestseller and Read with Jenna Book Club Pick, DEAR EDWARD, in a virtual event with the author, Ann Napolitano. DEAR EDWARD is a transcendent coming-of-age story about a twelve-year-old boy, Edward Adler, who is the sole survivor of a plane crash. The book follows Edward as he gains national attention following the crash, and how he comes to terms with losing his family, and finds the strength to move on and find meaning. During the event, Ann will be joined by her editor, Whitney Frick, and her agent, Julie Barer, where they will discuss the inspiration for the novel and answer audience questions.

Ann Napolitano has kindly signed bookplates for everyone purchasing DEAR EDWARD from An Unlikely Story, while supplies last.

ABOUT THE BOOK:
NEW YORK TIMES BESTSELLER • Read with Jenna Book Club Pick as Featured on Today • A “dazzling” novel that “will break your heart and put it back together again” (J. Courtney Sullivan, bestselling author of Saints for All Occasions) about a young boy who must learn to go on after surviving tragedy

NAMED ONE OF THE BEST BOOKS OF THE YEAR BY The Washington Post • Parade • LibraryReads • “A reading experience that leaves you profoundly altered for the better . . . Don’t miss this one.”—Jodi Picoult, bestselling author of Small Great Things and A Spark of Light

What does it mean not just to survive, but to truly live?

One summer morning, twelve-year-old Edward Adler, his beloved older brother, his parents, and 183 other passengers board a flight in Newark headed for Los Angeles. Among them are a Wall Street wunderkind, a young woman coming to terms with an unexpected pregnancy, an injured veteran returning from Afghanistan, a business tycoon, and a free-spirited woman running away from her controlling husband. Halfway across the country, the plane crashes. Edward is the sole survivor.

Edward’s story captures the attention of the nation, but he struggles to find a place in a world without his family. He continues to feel that a part of himself has been left in the sky, forever tied to the plane and all of his fellow passengers. But then he makes an unexpected discovery—one that will lead him to the answers of some of life’s most profound questions: When you’ve lost everything, how do you find the strength to put one foot in front of the other? How do you learn to feel safe again? How do you find meaning in your life?

Dear Edward is at once a transcendent coming-of-age story, a multidimensional portrait of an unforgettable cast of characters, and a breathtaking illustration of all the ways a broken heart learns to love again.

“Dear Edward made me think, nod in recognition, care about its characters, and cry, and you can’t ask more of a novel than that.”—Emma Donoghue, New York Times bestselling author of Room

“Weaving past and present into a profoundly beautiful, page-turning story of mystery, loss, and wonder, Dear Edward is a meditation on survival, but more important, it is about carving a life worth living. It is about love and hope and caring for others, and all the transitory moments that bind us together.”—Hannah Tinti, author of The Twelve Lives of Samuel Hawley and The Good Thief

ABOUT THE AUTHOR:
Ann Napolitano is the author of the novels A Good Hard Look and Within Arm’s Reach. She is also the associate editor of One Story literary magazine. She received an MFA from New York University and has taught fiction writing at Brooklyn College’s MFA program, New York University’s School of Continuing and Professional Studies, and Gotham Writers Workshop. She lives in Brooklyn with her husband and two children.

Whitney Frick, VP, Editorial Director, The Dial Press. Whitney has focused her editorial career on helping to shape, magnify, and promote the voices of women. At Dial, Whitney has published several critically-lauded and bestselling books, including the internationally bestselling feminist essay collection Notes to Self by Emilie Pine; Life of the Party, a boundary-pushing poetry collection by Olivia Gatwood; the New York Times bestselling novel, Dear Edward by Ann Napolitano; and the Reese Witherspoon Book Club Selection and blockbuster bestseller, Untamed by Glennon Doyle.

Born and raised in New York City, Julie Barer began her career as a bookseller at Shakespeare & Company. Her first job in publishing was at Sanford J. Greenburger Associates, and she started her own agency, Barer Literary, in 2004. She is now a partner at The Book Group, which she helped launch in 2015. Julie represents a variety of writers across a literary spectrum, with a special emphasis on fiction.

Her clients' work has appeared in The New Yorker, The New York Times, Best American Short Stories, The Wall Street Journal, The Atlantic Monthly, Harper's, Tin House, Granta and various other publications. Her clients have been finalists for the National Book Award, the National Book Critics' Circle Award, the Man Booker Prize, and the Impac Dublin Literary Award, and have received numerous prizes including the PEN/Hemingway Award, the Barnes & Noble Discover Award, the Kirkus Prize, the Dylan Thomas Prize, the Rome Prize, the Los Angeles Times First Book Award, the Lambda Literary Award, and the Orange Prize; as well as grants from The Fulbright Fellowship, The National Endowment of the Arts and the Guggenheim Foundation. Novels by several of her clients have graced the cover of The New York Times Book Review, and have appeared on national and international bestseller lists. Julie is particularly interested in representing a diversity of voices from around the world.