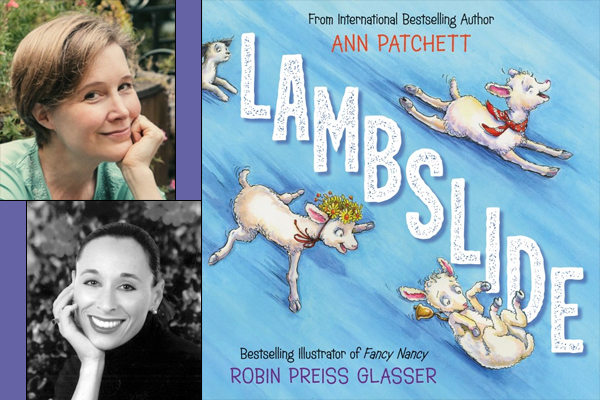 Tickets will be available beginning Wednesday, April 24th at 3pm and will include one copy of LAMBSLIDE and admission for two.

ABOUT THE BOOK:
In a hilarious picture book from bestselling author Ann Patchett and bestselling illustrator Robin Preiss Glasser, a pack of overly confident lambs set out to find a slide made just for them.

On the farm there was a flock of lambs who believed that everything was done especially for them....

So when they overhear Nicolette and the rest of the Farmer family say something about winning a school election by a landslide, they mistakenly hear the word

Un-baa-lievable! Could this be? A slide made JUST for lambs?!

With humor, curiosity, and just the right amount of entitlement, the lambs search the entire farm for the special slide. When they can’t spot one, there’s only one thing to do: take a vote!

Ann Patchett and Robin Preiss Glasser have collaborated for the first time to create a book that is an absolute riot! Children and adults will enjoy this sidesplitting play on words as they too anxiously wait to hear the election results: Will the lambs ever get to slide down a lambslide?

ABOUT ANN PATCHETT:
Ann Patchett is the author of eight novels and three works of nonfiction. She is the winner of the PEN/Faulkner Award, England’s Orange Prize, and the Book Sense Book of the Year, and was named one of Time magazine’s 100 Most Influential People in the World. Her work has been translated into more than thirty languages. Ann has written about many things, but she has had the most fun by far writing about this flock of happy, grumpy, confident, and pushy lambs. She is the co-owner of Parnassus Books in Nashville, TN, where she lives with her husband, Karl, and their dog, Sparky. You can visit her at www.annpatchett.com.

ABOUT ROBIN PREISS GLASSER:
Robin Preiss Glasser is the national bestselling illustrator of many books for children, including the Fancy Nancy series, written by Jane O’Connor; You Can’t Take a Balloon into the Metropolitan Museum, written by Jacqueline Preiss Weitzman; and You Made Me a Mother, written by Laurenne Sala. She lives in California with her husband, Bob, where they do not tend to a flock of lambs—but would certainly vote yes for a lambslide.