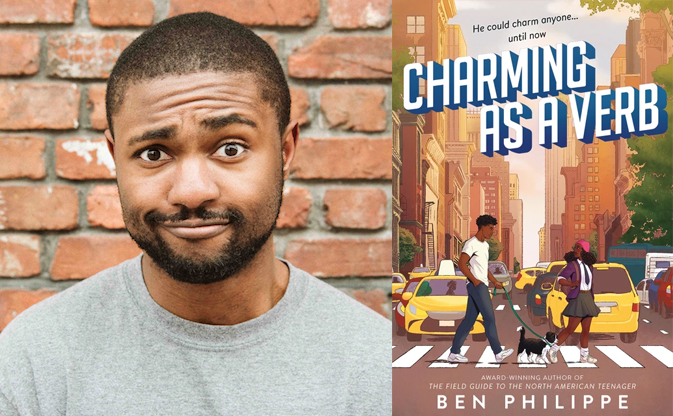 The delightful and very charming Ben Philippe joins us to introduce his new YA novel, CHARMING AS A VERB, in conversation with Becky Becky Albertalli.. Ben’s debut novel, The Field Guide to the North American Teenager, won the William C. Morris YA Debut Award and was one of the best teen books of 2019 by NPR and the New York Public Library. Ben visited us for an event in 2019, and just as in his writing, Ben is funny, charming, and brilliant  in person. CHARMING AS A VERB is  packed with whip-smart dialogue and snark, and Halti and Corinne’s banter will leave you laughing out loud and rooting for their will-they-won’t-they romance.

Becky Albertalli is the award-winning author of SIMON VS THE HOMO SAPIENS AGENDA now a major motion picture: LOVE, SIMON.

Her other works include: THE UPSIDE OF UNREQUITED, LEAH ON THE OFFBEAT, and WHAT IF IT'S US (in collaboration with Adam Silvera).

Ben has kindly signed bookplates for everyone purchasing his new book, while supplies last! When ordering your book please include that you would like a signed bookplate in the “order comments” section when checking out on our website.

ABOUT THE BOOK:
From the award-winning author of The Field Guide to the North American Teenager comes a whip-smart and layered romantic comedy. Perfect for fans of Nicola Yoon and Jenny Han.

Henri “Halti” Haltiwanger can charm just about anyone. He is a star debater and popular student at the prestigious FATE academy, the dutiful first-generation Haitian son, and the trusted dog walker for his wealthy New York City neighbors. But his easy smiles mask a burning ambition to attend his dream college, Columbia University.

There is only one person who seems immune to Henri’s charms: his “intense” classmate and neighbor Corinne Troy. When she uncovers Henri’s less-than-honest dog-walking scheme, she blackmails him into helping her change her image at school. Henri agrees, seeing a potential upside for himself.

Soon what started as a mutual hustle turns into something more surprising than either of them ever bargained for. . . .

This is a sharply funny and insightful novel about the countless hustles we have to keep from doing the hardest thing: being ourselves.

ABOUT THE AUTHOR:
Ben Philippe is a New York–based writer and screenwriter, born in Haiti and raised in Montreal, Canada. He has a Bachelor of Arts from Columbia University and an MFA in fiction and screenwriting from the Michener Center for Writers in Austin, Texas. He also teaches film studies and screenwriting at Barnard College. He is the author of the William C. Morris Award–winning novel The Field Guide to the North American Teenager. Find him online at www.benphilippe.com.

Charming as a Verb (Hardcover)

The Field Guide to the North American Teenager (Paperback)