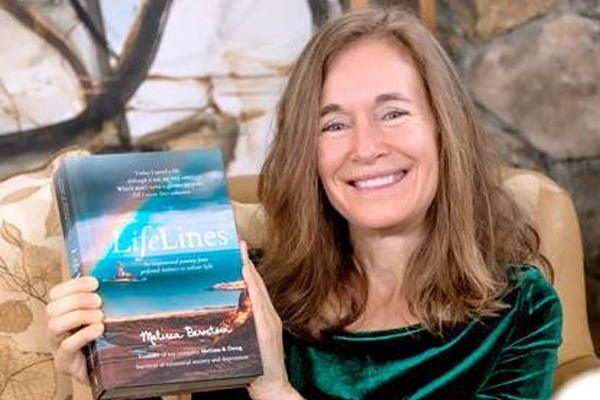 Melissa Bernstein, co-founder of the wildly successful toy company Melissa & Doug, is joining us for a virtual event on May 5th to share her inspirational memoir, LIFELINES. The book takes readers on Melissa's journey through depression and how her "lifelines" transformed despair into a beacon of hope. Melissa created LIFELINES with the hope that the book will help others find their path to meaning and inner peace. During the event, Melissa will be joined by Doug Bernstein, her husband and co-founder of Melissa & Doug. The two will discuss the book, how Melissa was able to triumph over her depression, and answer audience questions.

Melissa has kindly signed bookplates for everyone purchasing her new book from An Unlikely Story, while supplies last.

ABOUT THE BOOK:
Join Melissa Bernstein, Co-Founder of the wildly successful toy company Melissa & Doug, on a journey to triumph over anxiety, depression, and despair--a story she hopes will help others find their path to meaning and inner peace. Now, more than ever, Melissa's message is needed by others, and her promise to all who journey with her is that YOU ARE NOT ALONE.

Who would ever guess that Melissa Bernstein, happily-married mother of 6, creator of over 5,000 toys which have sold over a billion dollars, begins many days the same way far too many others do, wondering if she'll make it to tomorrow? Melissa shows us that when darkness descends, and it seems there's no escape, there actually is a way out, there actually is hope, and there actually is a path that can lead to meaning and purpose.

Melissa takes us on her path through depression, revealing how her "lifelines" transformed despair into a beacon of hope. Filled with prose, gorgeous photography, and many of Melissa's verses that express her struggles and breakthroughs, LifeLines is committed to helping others who are "stuck" develop a plan for themselves to survive and thrive.

A book of struggle and salvation, connection and community, LifeLines is a framework for people seeking to understand their emotional lives and to develop their own path to self-discovery and inner transformation.

ABOUT THE AUTHOR:
Melissa Bernstein, along with her husband Doug, is the Co-Founder of the toy company Melissa & Doug, which has created over 5,000 children’s products and sold billions of dollars of toys since its inception. Raised by educators, Melissa and Doug started the business in their garage in 1988, and they’ve been on a mission ever since to provide open-ended, inventive, non-technology playthings for young children. Throughout Melissa’s remarkable career, she kept secret her lifelong battle with severe depression and anxiety. She reveals her struggles in LifeLines, her first book, which she wrote to help others who are also suffering. Melissa’s book heralds the launch of LifeLines.com, an online ecosystem she and Doug are underwriting to support those seeking support, guidance, and community on their mental health journeys. Melissa lives in Connecticut with Doug and their six children.