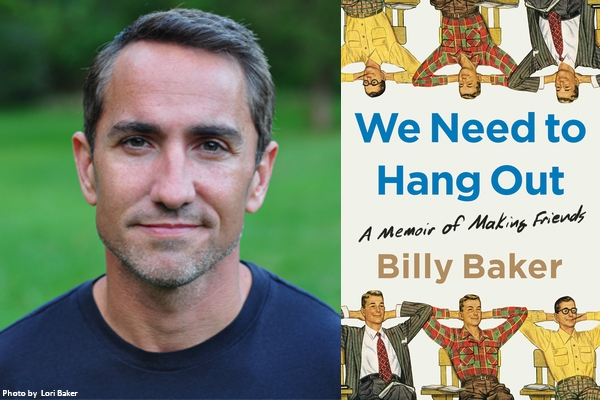 Join us for a one-of-a-kind virtual event with Boston Globe writer Billy Baker, author of the hilarious, moving memoir WE NEED TO HANG OUT. Now more than ever we find ourselves profoundly isolated. Billy's memoir is a relatable comic adventure where he touches upon being middle aged and balancing a busy job and an active family life, but discovering that he is lacking something: friends. In a moving quest that includes leading a buried treasure hunt with his old college crew, and organizing an impromptu “ditch day” for dozens of his former high school classmates to essentially starting a frat house for middle-aged guys in his neighborhood, Billy talks with experts in sociology and psychology to learn the reason why humans are becoming so isolated. Joining Baker for the event is DIARY OF A WIMPY KID author Jeff Kinney. The two will discuss Billy's book, what it's like trying to balance work and family life, and the importance of friendship as we age.

Billy has kindly signed bookplates for everyone purchasing his new memoir from An Unlikely Story, while supplies last.

ABOUT THE BOOK:
In this comic adventure through the loneliness epidemic, a middle-aged everyman looks around one day and realizes that he seems to have misplaced his friends, inspiring him to set out on a hilarious and ultimately moving quest to revive old tribes and build new ones, in his own ridiculous way.

At the age of forty, having settled into his busy career and active family life, Billy Baker discovers that he’s lost something crucial along the way: his friends. Other priorities always seemed to come first, until all his close friendships had lapsed into distant memories. When he takes an assignment to write an article about the modern loneliness epidemic, he realizes just how common it is to be a middle-aged loner: almost fifty million Americans over the age of forty-five, especially men, suffer from chronic loneliness, which the surgeon general has declared one of the nation’s “greatest pathologies,” worse than smoking, obesity, or heart disease in increasing a person’s risk for premature death. Determined to defy these odds, Baker vows to salvage his lost friendships and blaze a path for men (and women) everywhere to improve their relationships old and new.

In We Need to Hang Out, Baker embarks on an entertaining and relatable quest to reprioritize his ties with his buddies and forge more connections, all while balancing work, marriage, and kids. From leading a buried treasure hunt with his old college crew to organizing an impromptu “ditch day” for dozens of his former high school classmates to essentially starting a frat house for middle-aged guys in his neighborhood, he experiments with ways to keep in touch with his friends no matter how hectic their lives are—with surprising and deeply satisfying results.

Along the way, Baker talks to experts in sociology and psychology to investigate how such naturally social creatures as humans could become so profoundly isolated today. And he turns to real-life experts in lasting friendship, bravely joining a cruise packed entirely with crowds of female BFFs and learning the secrets of male bonding from a group of older dudes who faithfully meet up on the same night every week. Bursting with humor, candor, and charm, We Need to Hang Out is a celebration of companionship and a call to action in this age of alone.

ABOUT THE AUTHOR:
Billy Baker is a staff writer for The Boston Globe, where he writes narrative features and humorous columns. A native of South Boston, he is a graduate of Boston Latin School, Tulane University, and the Columbia Journalism School. He has received the Deborah Howell Award for Writing Excellence from the American Society of News Editors, and was a member of the Globe team that was awarded the Pulitzer Prize for coverage of the Boston Marathon bombings.

We Need to Hang Out: A Memoir of Making Friends (Hardcover)