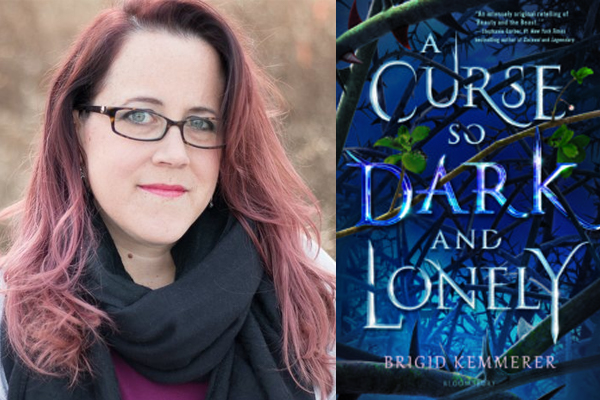 Brigid Kemmerer, author of the ELEMENTALS series and many other YA novels will be at An Unlikely Story to discuss her newest adventure, A CURSE SO DARK AND LONELY. In this exciting retelling of Beauty and the Beast, Kemmerer combines the classic romance with a refreshing twist. Join Brigid and Horace Mann Middle School, who will be hosting this event as part of their Family Literacy Night, on our Second Story. Following the presentation there will be a signing.

ABOUT THE BOOK:
This lush retelling of Beauty and the Beast features a kingdom in peril and a heart-stopping romance—perfect for fans of Marissa Meyer.

Prince Rhen is cursed. He spurned the wrong woman and is now forced to repeat the autumn of his eighteenth year until he can convince another to love him. His fate would be bearable, but at the end of every season, he transforms into a dangerous monster. After his subjects learned to fear the castle on the hill, Rhen sent Grey, the last member of his guard, to find young women in other worlds.

Harper is cursed by reality. Her father left and her mother is losing her fight with cancer. When Harper sees Grey abducting a woman from the streets of D.C., she intervenes, only to get sucked into Rhen’s world. Now, Harper is trapped. But when Harper proves to be more than just another girl to charm, Rhen realizes he can do more than break the curse . . . he can save his kingdom once and for all.

ABOUT THE AUTHOR:
Brigid Kemmerer is the author of More Than We Can Tell, Letters to the Lost, and the Elementals series. She was born in Omaha, Nebraska, though her parents quickly moved her all over the United States, from the desert in Albuquerque, New Mexico, to the lakeside in Cleveland, Ohio, and several stops in between, eventually settling near Annapolis, Maryland.

A Curse So Dark and Lonely (The Cursebreaker Series) (Hardcover)

Letters to the Lost (Paperback)

Call It What You Want (Hardcover)

More Than We Can Tell (Paperback)