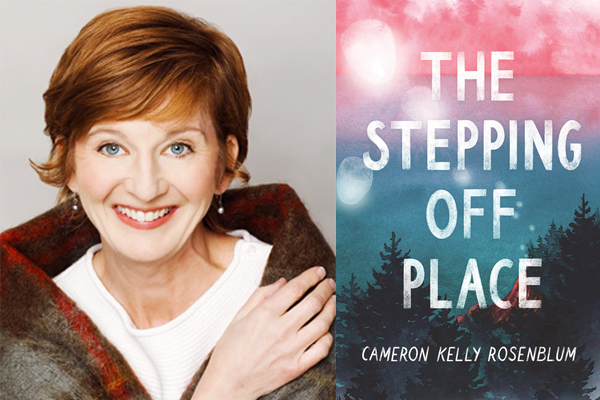 Debut author Cameron Kelly Rosenblum is discussing her YA novel, THE STEPPING OFF PLACE, with An Unlikely Story in a virtual event live on Crowdcast. THE STEPPING OFF PLACE is a moving and timely Young Adult novel that tackles love, grief, and mental health with unforgettable characters. Rosenblum will be in conversation with acclaimed AFTER THE WOODS author, Kim Savage.

When you purchase Cameron Kelly Rosenblum’s new book, THE STEPPING OFF PLACE, with An Unlikely Story you will receive a personalized bookplate, while supplies last. In order to receive your bookplate you must fill out >>THIS FORM<<.

ABOUT THE BOOK:
From debut author Cameron Kelly Rosenblum comes a stunning teen novel that tackles love, grief, and mental health as one girl must process her friend’s death and ultimately learn how to stand in her own light. Perfect for fans of All the Bright Places and We Were Liars.

It’s the summer before senior year. Reid is in the thick of Scofield High’s in-crowd thanks to her best friend, Hattie, who has been her social oxygen since middle school.

But summer is when Hattie goes to her family’s Maine island home. Instead of sitting inside for eight weeks, waiting for her to return, Reid and their friend, Sam, enter into a pact—to live it up, one party at a time.

But days before Hattie is due home, Reid finds out the shocking news that Hattie has died by suicide. Driven by a desperate need to understand what went wrong, Reid searches for answers.

In doing so, she uncovers painful secrets about the person she thought she knew better than herself. And the truth will force Reid to reexamine everything.

“Riveting, aching, and devastating in the best ways, [Cameron] Kelly Rosenblum’s moving debut is my favorite Young Adult novel of 2020.”
— Kim Savage, author of the critically acclaimed After the Woods, Beautiful Broken Girls, and In Her Skin

“A spectacular novel! A page turner that lingers.”
— Lynda Mullaly Hunt, author of New York Times bestseller Fish in a Tree and Bank Street Best Book, One for the Murphys

“This story captures all the passion and insecurity inherent in coming of age friendships. A not-to-be-missed debut that will make you laugh and cry, and ultimately embrace the multi-faceted, complex nature of existence.”
— Estelle Laure, author of This Raging Light

"Mysterious, playful, tender, and deeply true to its unforgettable heroines, you will fall in love with this story of an iridescent friendship and its unfathomable loss."
— New York Times bestselling author Jodi Lynn Anderson

"The large cast of characters are well and sensitively drawn. The novel doesn’t glorify suicide or dwell on the details of death. Instead it explores loss, futility, honesty, and love, with a richness of prose and excellence of characterization rare in a first-time author. A story to savor."
— Kirkus Reviews (starred review)

"Rosenblum's debut novel is a beautifully written examination not only of the sadness of grief, but of the uncertainty it can bestow upon everything. Perfect fans of Jennifer Niven's All the Bright Places, [this] is a novel that moves beyond a story of loss into one of self-discovery."
— Booklist

ABOUT THE AUTHORS:
Cameron Kelly Rosenblum grew up in Connecticut. She studied English literature at Kenyon College and earned a master’s in education at Lesley University. Her time as a teacher and children’s librarian inspired her to write for young people. The Stepping Off Place is her debut novel. Cameron lives near Portland, Maine, with her husband, son, daughter, two dogs, and a cat. Visit her online at www.cameronrosenblum.com or on Twitter @ckellyrose.

Kim Savage is the author of After the Woods (Booklist Top 10 Crime Fiction 2016), Beautiful Broken Girls (Kirkus 10 Best YA 2017), and In Her Skin (YALSA Best 2019), all with Farrar, Straus, Giroux/Macmillan. Her novels have been published in Spain, Brazil, and Turkey, and have been optioned for television and streaming series. Kim presents at conferences and book festivals nationwide; has been featured on radio and podcasts including NPR, Authors on the Air Global Podcast, and Herald Radio, among others; and meets her readers at bookstores across the country. Kim is a former reporter who received a Master's degree in Journalism from Northeastern University. She worked as a business journalist, pitching story ideas along the lines of "When Murder Kills Property Values." You get the idea. Born on Massachusetts' South Shore, Kim lives in Winchester, near the real Middlesex Fells Reservation of After the Woods.

The Stepping Off Place (Hardcover)

In Her Skin: A Novel (Paperback)