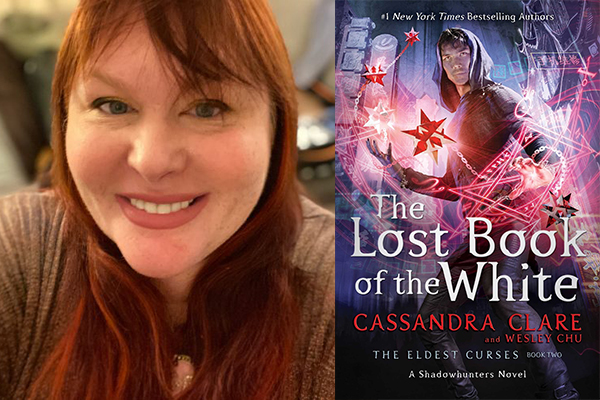 Celebrate THE LOST BOOK OF THE WHITE launch with Cassandra Clare with special guest Holly Black!

Come join us as we celebrate the launch of Cassandra Clare's THE LOST BOOK OF THE WHITE, the second novel in the Eldest Curses series! Get up close with Cassie and her longtime critique partner Holly Black as they discuss the evolution of Malec from the first introduction of the characters to where they are today.

Your ticket includes admission to the virtual event, a copy of The Lost Book of the White, a bookplate signed by Cassandra Clare and a special Lost Book of the White enamel pin, while supplies last. International customers, please contact kym@anunlikelystory.com before ordering your ticket, for shipping charges may vary.

Note: There is a zero tolerance policy for harassment or intimidation of any kind during this virtual event.  This harassment includes, but is not limited to: vulgar, obscene, and abusive language; name-calling; taunting; and any conduct that demeans a person/group on the basis of race, ethnicity, religion, gender, sexual orientation, creed, age, or disability.

ABOUT THE BOOK:
From #1 New York Times bestselling authors Cassandra Clare and Wesley Chu comes the second book in the Eldest Curses series and a thrilling new adventure for High Warlock Magnus Bane and Alec Lightwood, for whom a death-defying mission into the heart of evil is not just a job, it’s also a romantic getaway. The Lost Book of the White is a Shadowhunters novel.

Life is good for Magnus Bane and Alec Lightwood. They’re living together in a fabulous loft, their warlock son, Max, has started learning to walk, and the streets of New York are peaceful and quiet—as peaceful and quiet as they ever are, anyway.

Until the night that two old acquaintances break into Magnus’s apartment and steal the powerful Book of the White. Now Magnus and Alec will have to drop everything to get it back. They need to follow the thieves to Shanghai, they need to call some backup to accompany them, and they need a babysitter.

Also, someone has stabbed Magnus with a strange magical weapon and the wound is glowing, so they have that to worry about too.

Fortunately, their backup consists of Clary, Jace, Isabelle, and newly minted Shadowhunter Simon. In Shanghai, they learn that a much darker threat awaits them. Magnus’s magic is growing unstable, and if they can’t stop the demons flooding into the city, they might have to follow them all the way back to the source—the realm of the dead. Can they stop the threat to the world? Will they make it back home before their kid completely wears out Alec’s mom?

ABOUT THE AUTHOR:
Cassandra Clare is the #1 New York Times and USA TODAY bestselling author of Chain of Gold as well as the internationally bestselling Dark Artifices trilogy, Mortal Instruments series, and Infernal Devices trilogy. She is the coauthor of the Eldest Curses series with Wesley Chu; The Bane Chronicles with Sarah Rees Brennan and Maureen Johnson; Tales from the Shadowhunter Academy with Sarah Rees Brennan, Maureen Johnson, and Robin Wasserman; and Ghosts of the Shadow Market with Sarah Rees Brennan, Maureen Johnson, Kelly Link, and Robin Wasserman. Her books have more than 50 million copies in print worldwide and have been translated into more than thirty-five languages and made into a feature film and a TV show. Cassandra lives in western Massachusetts. Visit her at CassandraClare.com. Learn more about the world of the Shadowhunters at Shadowhunters.com.

The Red Scrolls of Magic (The Eldest Curses #1) (Paperback)

The Red Scrolls of Magic (The Eldest Curses #1) (Hardcover)