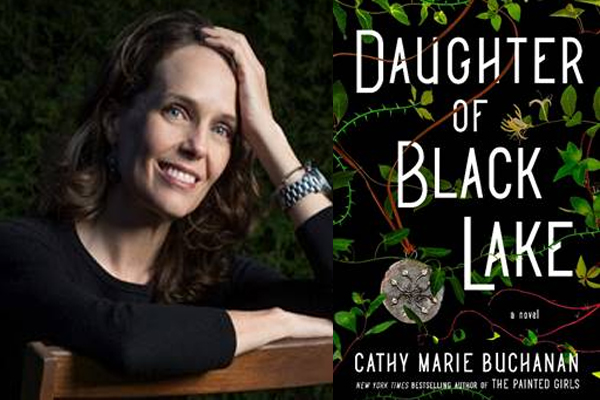 Escape to the vivid, natural world of 1st century Britannia (or what it will ultimately become), a time of simple pleasures and tangible threats with Cathy Marie Buchanan's DAUGHTER OF BLACK LAKE, her transporting historical novel. Cathy will discuss her highly anticipated novel with Pam Jenoff, bestselling author of THE ORPHAN'S TALE, followed by a Q & A.

Here is bookseller Gabrielle's review: "Daughter of Black Lake is a wholly unique historical family saga with a touch of magic set during the Roman invasion of Britain. The reader becomes enmeshed in the druidic community on the shores of Black Lake and in the lives of Devout and her daughter Hobble. This book is filled with twists and turns as the past and present converge. It's atmospheric and engrossing. I highly recommend it!"

Cathy Marie Buchanan has kindly signed bookplates for everyone purchasing her new book, while supplies last! When ordering your book please include that you would like a signed bookplate in the “order comments” section when checking out on our website.

ABOUT THE BOOK:
In a world of pagan traditions and deeply rooted love, a girl in jeopardy must save her family and community. A transporting historical novel by New York Times-bestselling author Cathy Marie Buchanan.

It’s the season of Fallow, in the era of iron. In a northern misty bog surrounded by woodlands and wheat fields, a settlement lies far beyond the reach of the Romans invading hundreds of miles to the southeast. Here, life is simple—or so it seems to the tightly knit community. Sow. Reap. Honor Mother Earth, who will provide at harvest time. A girl named Devout comes of age, sweetly flirting with the young man she’s tilled alongside all her life, and envisions a future of love and abundance. Seventeen years later, though, the settlement is a changed place. Famine has brought struggle, and outsiders, with their foreign ways and military might, have arrived at the doorstep. For Devout’s young daughter, life is more troubled than her mother ever anticipated. But this girl has an extraordinary gift. As worlds collide and peril threatens, it will be up to her to save her family and community.

Set in a time long forgotten, Daughter of Black Lake brings the ancient world to life and introduces us to an unforgettable family facing an unimaginable trial.

ABOUT THE AUTHOR:
Cathy Marie Buchanan’s previous novels, The Painted Girls and The Day the Falls Stood Still, were both New York Times bestsellers, with The Painted Girls named a best book of the year by NPR, Good Housekeeping, and Goodreads. Buchanan’s work has been translated into nine languages. She lives in Toronto.

ABOUT PAM JENOFF:
Pam Jenoff is the author of several books of historical fiction, including the NYT bestseller The Orphan's Tale. She holds a degree in international affairs from George Washington University and a degree in history from Cambridge, and she received her JD from UPenn. Her novels are inspired by her experiences working at the Pentagon and as a diplomat for the State Department handling Holocaust issues in Poland. She lives with her husband and 3 children near Philadelphia, where she teaches law.