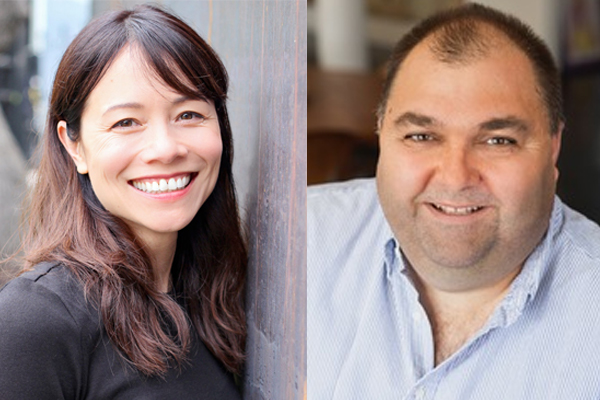 We wish we could spy with middle grade authors Christina Soontornvat and James Ponti in person, but they’re still bringing adventure at a virtual event with us on Crowdcast! Christina and James will talk about Christina’s Thai-inspired fantasy novel, A WISH IN THE DARK, and James’ book of intrigue and found family, CITY SPIES.

When you purchase either Christina or James' new books (below) from An Unlikely Story you will receive a signed bookplate, while supplies last.

ABOUT A WISH IN THE DARK:
A boy on the run. A girl determined to find him. A compelling fantasy looks at issues of privilege, protest, and justice.

All light in Chattana is created by one man — the Governor, who appeared after the Great Fire to bring peace and order to the city. For Pong, who was born in Namwon Prison, the magical lights represent freedom, and he dreams of the day he will be able to walk among them. But when Pong escapes from prison, he realizes that the world outside is no fairer than the one behind bars. The wealthy dine and dance under bright orb light, while the poor toil away in darkness. Worst of all, Pong’s prison tattoo marks him as a fugitive who can never be truly free.

Nok, the prison warden’s perfect daughter, is bent on tracking Pong down and restoring her family’s good name. But as Nok hunts Pong through the alleys and canals of Chattana, she uncovers secrets that make her question the truths she has always held dear. Set in a Thai-inspired fantasy world, Christina Soontornvat’s twist on Victor Hugo’s Les Misérables is a dazzling, fast-paced adventure that explores the difference between law and justice — and asks whether one child can shine a light in the dark.

ABOUT CITY SPIES:
In this thrilling new series that Stuart Gibbs called “a must-read,” Edgar Award winner James Ponti brings together five kids from all over the world and transforms them into real-life spies—perfect for fans of Spy School and Mrs. Smith’s Spy School for Girls.

Sara Martinez is a hacker. She recently broke into the New York City foster care system to expose her foster parents as cheats and lawbreakers. However, instead of being hailed as a hero, Sara finds herself facing years in a juvenile detention facility and banned from using computers for the same stretch of time. Enter Mother, a British spy who not only gets Sara released from jail but also offers her a chance to make a home for herself within a secret MI6 agency.

Operating out of a base in Scotland, the City Spies are five kids from various parts of the world. When they’re not attending the local boarding school, they’re honing their unique skills, such as sleight of hand, breaking and entering, observation, and explosives. All of these allow them to go places in the world of espionage where adults can’t.

Before she knows what she’s doing, Sarah is heading to Paris for an international youth summit, hacking into a rival school’s computer to prevent them from winning a million euros, dangling thirty feet off the side of a building, and trying to stop a villain…all while navigating the complex dynamics of her new team.

No one said saving the world was easy…

ABOUT THE AUTHORS:
Christina Soontornvat grew up in a small Texas town where she spent many childhood days behind the counter of her parents' Thai restaurant with her nose in a book. She is the author of many books for young readers, including The Blunders, illustrated by Colin Jack. She now lives in Austin, Texas, with her husband and two children.

James Ponti was born in Italy, raised in Florida, and went to college in California. After receiving a degree in screenwriting from the USC Film School, he began a career writing and producing television shows for the likes of Nickelodeon, Disney Channel, PBS, Spike TV, History Channel, and Golf Channel. James loves writing, travel, and the Boston Red Sox. He lives with his family in Maitland, Florida.

A Wish in the Dark (Hardcover)