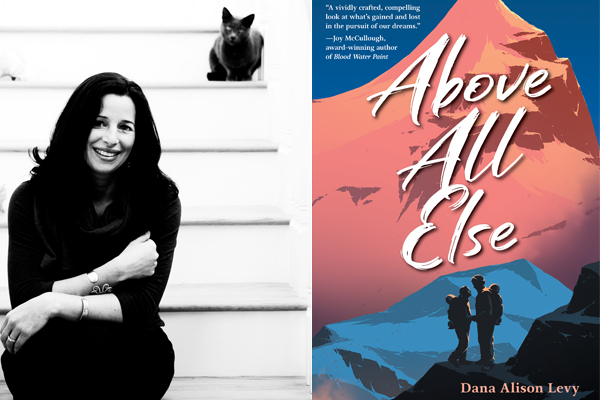 Join us for the launch of Dana Alison Levy's YA debut, ABOVE ALL ELSE,  with an in-conversation event with Rachael Allen (THE SUMMER OF IMPOSSIBILITIES) and Kate Boorman (WHAT WE BURIED)! These three talented authors know each other's work very well, and it's sure to be an interesting candid conversation not to be missed.

When you purchase Dana Alison Levy's ABOVE ALL ELSE from An Unlikely Story you will receive a signed bookplate, while supplies last. In order to receive your bookplate, please include that you would like a signed bookplate in the “order comments” section when checking out on our website.

ABOUT THE BOOK:
In a novel as riveting, irresistible, and heartbreaking as Into Thin Air, teen climbing prodigies Rose and Tate attempt to summit--and survive--Mount Everest.

Rose Keller and Tate Russo have been climbing for years, training in harsh weather and traveling all over the world. The goal that kept them going? Summiting Mount Everest, the highest point on earth. Accompanied by Tate's dad, the two will finally make the ultimate climb at the end of their senior year. But neither Rose nor Tate are fully in the game--not only is there a simmering romance between them, but Rose can't get her mind off her mother's illness, while Tate constantly fails to live up to his ambitious father's standards.

Everyone on their expedition has something to prove, it seems. And not everyone is making the best decisions while short on oxygen and exhausted, body and mind. The farther up the mountain they go, the more their climbing plans unravel and the more isolated each team member becomes. Rose and Tate will have to dig deep within themselves to determine what--or who--they value above all else.

ABOUT THE AUTHORS:
Dana Alison Levy was raised by pirates but escaped at a young age and went on to earn a degree in aeronautics and puppetry. Actually, that’s not true—she just likes to make things up. That’s why she always wanted to write books. Dana’s upcoming novel, Above All Else, takes place on Mount Everest and is her first for Young Adults. Her novels for younger kids, The Misadventures of the Family Fletcher, The Family Fletcher Takes Rock Island, This Would Make a Good Story Someday, and It Wasn’t Me have garnered multiple starred reviews, been named to Best Of lists, and were Junior Library Guild Selections. Also her kids like them. She was born and raised in New England and lives in Massachusetts.

Rachael Allen is the winner of the 2019 Georgia YA Author of the Year Award, whose books include 17 First Kisses, The Revenge Playbook, and A Taxonomy of Love, which was a Junior Library Guild selection, a 2018 Book All Young Georgians Should Read. She lives in Atlanta with her husband, two children, and two sled dogs. Visit Rachael at rachaelallenwrites.blogspot.com.

Kate A. Boorman is an award-winning writer from the Canadian prairies. She is the author of the Winterkillseries; Winterkill, Darkthaw and Heartfire. She was born in Nepal, grew up in the small town of Rimbey, Alberta, and now lives in Edmonton, where she wrangles her family and schemes up travel to faraway lands. Kate has a MA in Dramatic Critical Theory and has held an odd assortment of jobs, from accordion accompanist to qualitative research associate. She has a fondness for nature, though birds tend to worry her a great deal.

Above All Else (Hardcover)

The Summer of Impossibilities (Hardcover)

What We Buried (Hardcover)