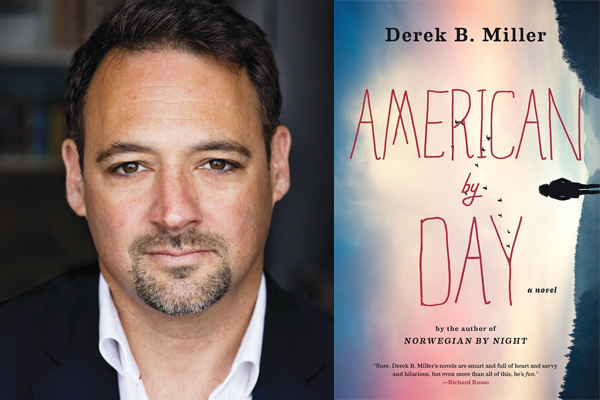 Having worked for think tanks, diplomatic missions, and the UN, author Derek Miller combines his knowledge of international affairs with mystery and humor in his new book. AMERICAN BY DAY, the gripping follow-up to NORWEGIAN BY NIGHT follows police Chief Inspector Sigrid Ødegård to the United States where she must navigate the politics of a strange country while searching for her missing brother. At the event, Derek will talk about his new novel, answer questions, and sign copies. Beer and wine will be available for purchase at the event.

A gripping and timely novel that follows Sigrid—the dry-witted detective from Derek B. Miller's best-selling debut Norwegian by Night—from Oslo to the United States on a quest to find her missing brother.

SHE KNEW IT WAS A WEIRD PLACE. She’d heard the stories, seen the movies, read the books. But now police Chief Inspector Sigrid Ødegård has to leave her native Norway and actually go there; to that land across the Atlantic where her missing brother is implicated in the mysterious death of a prominent African-American academic. AMERICA.

Sigrid is plunged into a United States where race and identity, politics and promise, reverberate in every aspect of daily life. Working with—or, if necessary, against—the police, she must negotiate the local political minefields and navigate the backwoods of the Adirondacks to uncover the truth before events escalate further.

Refreshingly funny, slyly perceptive, American by Day secures Derek B. Miller's place as one of our most imaginative and entertaining novelists.

ABOUT THE AUTHOR:
Derek B. Miller has worked on international peace and security for think tanks, diplomatic missions, and the United Nations. His first novel, Norwegian by Night, was an Indies Choice Honor Book, an Economist best book of 2013, and a winner of the Crime Writers' Association's John Creasey Dagger Award. His second novel, The Girl in Green, was published in 2017. Born and raised in Boston, Miller has lived abroad for more than fifteen years, in Norway, Switzerland, Britain, Israel, and Hungary. He now lives in Oslo, Norway, with his wife and two children.

The Girl in Green (Paperback)