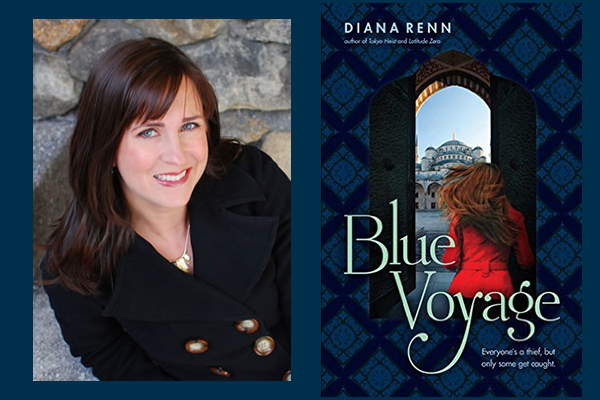 Diana will be visiting us for a special release event for her latest mystery book, Blue Voyage. The event will feature a presentation about her work and a reading from Blue Voyage followed by a question & answer session and book signing. This event is recommended for children ages 12+.

There will be a special gift basket prize for one lucky winner! A copy of Blue Voyage must be purchased on the event date to be eligible to win. Good luck!

ABOUT THE BOOK:
Blue Voyage is an intricately crafted mystery set in the contemporary Middle East.

Zan is a politician’s daughter and an adrenaline junkie. Whether she’s rock climbing or shoplifting, she loves to live on the edge. But she gets more of a rush than she bargained for on a forced mother–daughter bonding trip to Turkey, where she finds herself in the crosshairs of an antiquities smuggling ring. These criminals believe that Zan can lead them to an ancient treasure that’s both priceless and cursed. Until she does so, she and her family are in grave danger. Zan’s quest to save the treasure—and the lives of people she cares about—leads her from the sparkling Mediterranean, to the bustle of Istanbul's Grand Bazaar, to the eerie and crumbling caves of Cappadocia. But it seems that nowhere is safe, and there’s only so high she can climb before everything comes tumbling down.

ABOUT THE AUTHOR:
Diana Renn writes novels for young adults. Her books, all published by Viking / Penguin, include Tokyo Heist (2012), Latitide Zero (2014) and Blue Voyage (coming fall 2015). Tokyo Heist was optioned for film and was an Indie Next Pick. LATITUDE ZERO was a Junior Library Guild Selection. All three of her mysteries feature globetrotting teen sleuths and international intrigue. Diana is also the Fiction Editor at YARN (Young Adult Review Network), an award-winning online magazine featuring short-form writing for young adults of all ages. For more information about Diana, please visit her website at: www.dianarenn.net