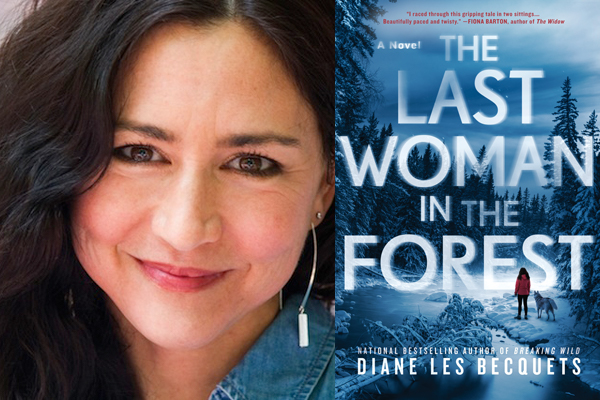 Some women are born wild. Some women are made. In 2016, Diane Les Becquets burst onto the scene with her bestselling debut novel, Breaking Wild, which Tana French called "a powerful, visceral book about the incredible human capacity to transcend the limitations imposed by our own pasts and our own fears." We are thrilled to welcome Diane Les Becquets to introduce her follow up novel: THE LAST WOMAN IN THE FOREST: a thriller about a woman who fears that the man she loved may have been a serial killer. Combining her love of nature and wildlife conservation, her personal horrific experience with assault, and her interest in the real-life unsolved Connecticut River Murders of the 1980s, Les Becquets has delivered a novel of suspense that will haunt readers until the last page, and resonate particularly with women as we grapple with the issues taken up in our national conversations as a result of the #metoo movement.

ABOUT THE BOOK:
The national bestselling author of Breaking Wild delivers a riveting and haunting thriller about a woman who fears that the greatest threat to her survival could be the man she loves…

Marian Engström has found her true calling: working with rescue dogs to help protect endangered wildlife. Her first assignment takes her to northern Alberta, where she falls in love with her mentor, the daring and brilliant Tate. But after a tragic accident, Marian discovers growing and disturbing inconsistencies about Tate’s life, and begins to wonder if the man she loved could have been responsible for the unsolved murders of at least four women.

Desperately hoping to clear Tate’s name as a serial killer, she reaches out to a retired forensic profiler who’s haunted by the open cases. Marian relives her relationship with Tate, but as she circles ever closer to the truth, evil stalks her every move…

ABOUT THE AUTHOR:
Diane Les Becquets is the author of THE LAST WOMAN IN THE FOREST (March, 2019) and BREAKING WILD, both published by Berkley, Penguin Random House. BREAKING WILD, an Indie Next Pick and a national bestseller, received starred reviews from Publishers Weekly, Kirkus Reviews, and Booklist. It was also the recipient of the Colorado Book Award in Fiction, the New Hampshire Outstanding Work of Fiction, and was shortlisted for the Reading the West Book Award in Fiction. Les Becquets is also the author of three young adult novels: THE STONES OF MOURNING CREEK (Kirkus starred review); LOVE, CAJUN STYLE (Booklist starred review) and SEASON OF ICE, the latter being the recipient of a Pen American Fellowship. Other awards she has received include a BCCB Blue Ribbon Award, the Maine Lupine Award, ALA Best Book of the Year, Foreward Reviews Gold Winner Book of the Year, Volunteer State Book Award Selection, and Garden State Book Award Finalist.

A former professor of English, Les Becquets has served as a judge for the New Hampshire State Council on the Arts and the Maine Arts Commission, and has taught writing workshops at venues across the country, including the University of Mississippi, Auburn University, the New Hampshire Writers' Project, the Department of Forestry, Writers Conference at Ocean Park, Writers in Paradise, the Arkansas Literary Festival, the Telluride Arts District, and at shelters for Katrina victims. She is a volunteer at Back in the Saddle Equine Therapy Center and an avid outdoors woman, enjoying archery, bicycling, snowshoeing, swimming, and backpacking with her dog, Izzy. Before moving to New Hampshire, where she now resides with her husband, she lived in a small ranching town in Northwestern Colorado for almost fourteen years, raising her three sons.

The Last Woman in the Forest (Hardcover)