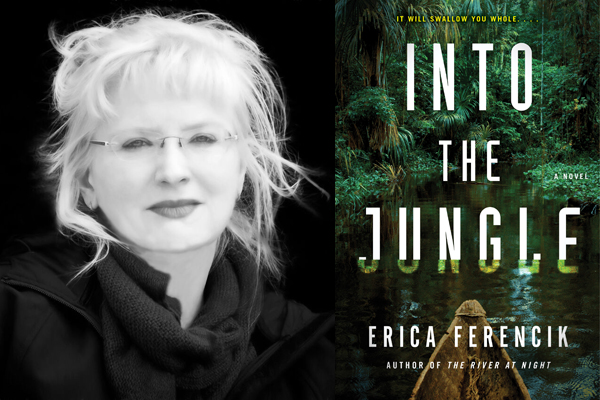 Join us for an evening of wonderful conversation with Erica Ferencik about her journey to the Amazon and the life-changing sights she saw. Erica will present a talk and slide presentation for the upcoming release of her new novel, INTO THE JUNGLE.. To research this novel, she conducted countless interviews and spent the month of July, 2017 in the Peruvian rainforest where she took hundreds of photos and videos of the fascinating plants, animals and people of the rainforest. The presentation will be followed by a book signing. Wine and beer will be available for purchase at the event.

ABOUT THE BOOK:
When the teaching job that lures scrappy 19-year-old foster care survivor Lily Bushwold, the narrator of this ferocious fever dream of a thriller from Ferencik (The River at Night), from Boston to Cochabamba, Bolivia, falls through, she decides to stay on. In Cochabamba, Lily falls hard for handsome mechanic Omar, and then, through the stories he tells, for the remote Amazonian jungle where his clan has lived for seven generations. So when Omar's brother Panchito arrives from Ayachero, the tiny village Omar left years earlier, to ask Omar to return to lead the hunt for the jaguar that has killed their four-year-old nephew, Lily begs to go with him—pythons, tarantulas, and menacing neighboring Tatinga tribe be damned. And that's not the half of it, Lily discovers once in Ayachero. Despite Lily's fluent Spanish, Omar's family and friends are none too welcoming to a gringa lacking any discernible skills to help a struggling community squeezed between ruthless poachers and the Tatinga. Ferencik delivers an alternately terrifying and exhilarating tale.

ABOUT THE AUTHOR:
Oprah chose Erica Ferencik's debut novel, THE RIVER AT NIGHT as a #1 Pick, calling the book "the page-turning novel you've been waiting for, a heart-pounding debut." Entertainment Weekly named it a "Must Read," and calls the novel "harrowing...a visceral, white knuckle rush," and Miramax has recently optioned the novel for a film. Her new novel, INTO THE JUNGLE, one woman's terrifying journey of survival in the Bolivian Amazon, will be released in May, 2019. Publishers Weekly gave it a starred review, calling it: "[A] ferocious fever dream of a thriller... Ferencik delivers an alternately terrifying and exhilarating tale." Her work has appeared in Salon and The Boston Globe, as well as on National Public Radio.

Into the Jungle (Hardcover)

The River at Night: A Novel (Paperback)