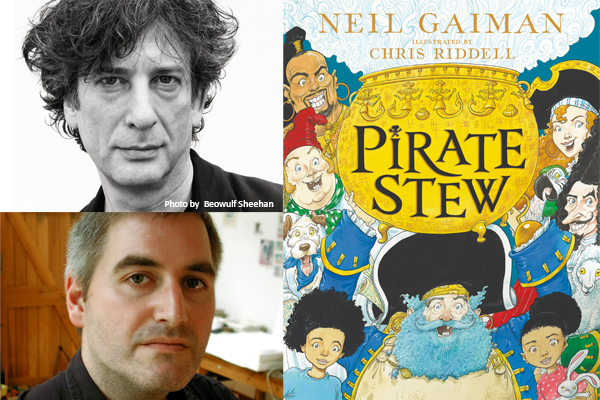 The #1 New York Times bestselling and award-winning author Neil Gaiman, and acclaimed British artist Chris Riddell are celebrating the launch of their new picture book, PIRATE STEW, in a virtual event with us! Booklist called PIRATE STEW: "Highly enjoyable, with Gaiman’s silly, singsong verses the perfect ingredient for a raucous read-aloud. Riddell’s predictably fabulous illustrations are ablaze with color and detail."   Gaiman and Riddell will be in conversation with HOW TO BE A PIRATE author Isaac Fitzgerald.

Tickets to the event include a copy of PIRATE STEW, a signed bookplate from the creators, and an exclusive link to access the event.

ABOUT THE BOOK:
Meet LONG JOHN McRON, SHIP'S COOK . . . and the most unusual babysitter you've ever seen.

Long John has a whole crew of wild pirates in tow, and—for one boy and his sister—he's about to transform a perfectly ordinary evening into a riotous adventure beneath a pirate moon. It's time to make some PIRATE STEW.

Marvelously silly and gloriously entertaining, this tale of pirates, flying ships, doughnut feasts and some rather magical stew is perfect for all pirates, both young and old.

With a deliciously rhyming text from master storyteller Neil Gaiman and spellbinding illustrations by the supremely talented Chris Riddell, this is the picture book of the year!

Chris Riddell is an acclaimed British artist and former UK Children's Laureate. He has written and illustrated many books of his own, including Ottoline and the Yellow Cat and Ottoline Goes to School, and has illustrated, for Bloomsbury UK, The Graveyard Book, Coraline, and Fortunately, the Milk, as well as The Sleeper and the Spindle.

Isaac Fitzgerald has been a firefighter, worked on a boat, and was once given a sword by a king, thereby accomplishing three out of five of his childhood goals. After making a bunch of cool things for the internet, he now writes books and lives in Brooklyn, New York.

How to Be a Pirate (Hardcover)