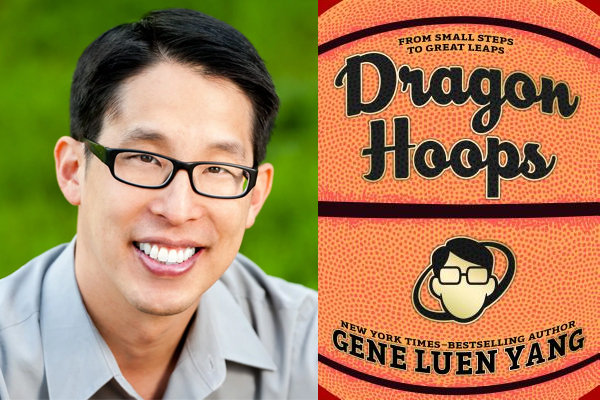 It’s a slam dunk birthday celebration! On An Unlikely Story's fifth birthday, we’re thrilled to host National Book Award nominee and graphic novelist Gene Luen Yang at a virtual event on Crowdcast. Gene is talking about his latest graphic novel, DRAGON HOOPS, with Diary of a Wimpy Kid author, Jeff Kinney. After the discussion, Gene and Jeff will do a drawing demonstration!

If you purchase Gene Luen Yang’s new book, DRAGON HOOPS, through our website (below) you will receive a personalized bookplate, while supplies last. In order to receive your bookplate you must fill out THIS FORM by Sunday, May 31st.

ABOUT THE BOOK:
In his latest graphic novel, Dragon Hoops, New York Times bestselling author Gene Luen Yang turns the spotlight on his life, his family, and the high school where he teaches.

But Gene doesn’t get sports. As a kid, his friends called him “Stick” and every basketball game he played ended in pain. He lost interest in basketball long ago, but at the high school where he now teaches, it's all anyone can talk about. The men’s varsity team, the Dragons, is having a phenomenal season that’s been decades in the making. Each victory brings them closer to their ultimate goal: the California State Championships.

Once Gene gets to know these young all-stars, he realizes that their story is just as thrilling as anything he’s seen on a comic book page. He knows he has to follow this epic to its end. What he doesn’t know yet is that this season is not only going to change the Dragons’s lives, but his own life as well.

ABOUT THE AUTHOR:
Gene Luen Yang writes, and sometimes draws, comic books and graphic novels. As the Library of Congress’ fifth National Ambassador for Young People’s Literature, he advocates for the importance of reading, especially reading diversely. American Born Chinese, his first graphic novel from First Second Books, was a National Book Award finalist, as well as the winner of the Printz Award and an Eisner Award. His two-volume graphic novel Boxers & Saints won the L.A. Times Book Prize and was a National Book Award Finalist. His other works include Secret Coders (with Mike Holmes), The Shadow Hero (with Sonny Liew), New Super-Man from DC Comics (with various artists), and the Avatar: The Last Airbender series from Dark Horse Comics (with Gurihiru). In 2016, he was named a MacArthur Foundation Fellow.