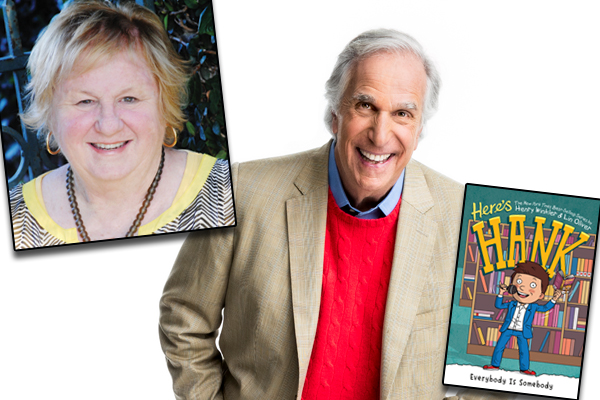 Here’s Henry and Lin! Authors Henry Winkler and Lin Oliver are coming to An Unlikely Story to discuss their new book, HERE’S HANK: EVERYBODY IS SOMEBODY, the last book in the HERE’S HANK series. Inspired by his own struggles with a learning disability, Henry Winkler co-wrote the Hank Zipzer books with Lin Oliver. The authors will give a short presentation, answer questions, and sign books.

Tickets for this event are SOLD OUT. If you would like to get a signed copy of HERE’S HANK EVERYBODY IS SOMEBODY please click the book below and add it to your shopping cart. While ordering, please leave a note in the comments section to have the book signed and to whom you would like it personalized. You can also call the store at (508) 699-0244 and order your copy over the phone.

ABOUT THE BOOK:
In the final book of this bestselling easy-to-read series, Hank begins a new chapter!

When a well-known author of a beloved book series visits Hank’s school, Hank and his two best friends get the chance to be the author’s guide for the day and introduce her at an assembly. But Hank, embarrassed by his struggles with reading, tries to hide the fact that he’s never actually finished reading the author’s books—or any book, for that matter! So Hank gets creative and makes up his own version of the story. But will everyone be able to tell fact from fiction?

This bestselling series written by Henry Winkler and Lin Oliver is perfect for the transitional reader. With a unique, easy-to-read font, endless humor, and characters every kid would want to be friends with, any story with Hank is an adventure!

ABOUT THE SERIES:
Here’s Hank, the New York Times bestselling series written by Henry Winkler and Lin Oliver, is the perfect series for the transitional reader. It features easy-to-read font, simple funny stories, and characters like Hank Zipzer. Hank may not be the best at spelling (or math, or reading) but he always tries his hardest, whether he’s helping out his younger sister, standing up to the class bully, or getting into—and out of!—trouble with his two best friends.

ABOUT THE AUTHORS:
Henry Winkler is an actor, producer, and director, and he speaks publicly all over the world. He has a star on Hollywood Boulevard, was presented with the Order of the British Empire by the Queen of England, and the jacket he wore as the Fonz hangs in the Smithsonian Museum in Washington, DC. But if you ask him what he is proudest of, he would say, “Writing the Hank Zipzer books with my partner, Lin Oliver.” He lives in Los Angeles with his wife, Stacey.

Lin Oliver is a writer and producer of movies, books, and television series for children and families. She has written more than forty books for children, and one hundred episodes of television. She is cofounder and executive director of the Society of Children’s Book Writers and Illustrators, an international organization of twenty thousand authors and illustrators of children’s books.