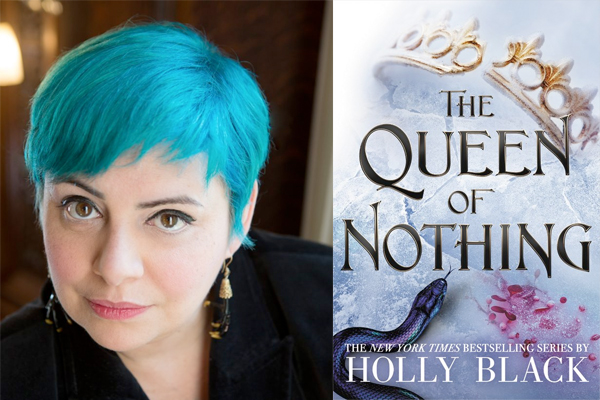 To celebrate the much-anticipated release of QUEEN OF NOTHING, the Queen of Everything YA Fantasy, Holly Black is coming to An Unlikely Story! She’ll be in conversation with fellow YA fantasy legend Cassandra Clare. The two authors will discuss Holly’s new book, answer fan questions, and sign copies.

Tickets will be available Tuesday, October 15th at 10:00am and will include one (1) copy of QUEEN OF NOTHING.

ABOUT THE BOOK:
From the #1 New York Times bestselling author Holly Black, comes the highly anticipated and jaw-dropping finale to The Folk of the Air trilogy.

He will be the destruction of the crown and the ruination of the throne.

Power is much easier to acquire than it is to hold onto. Jude learned this lesson when she released her control over the wicked king, Cardan, in exchange for immeasurable power.

Now as the exiled mortal Queen of Faerie, Jude is powerless and left reeling from Cardan's betrayal. She bides her time determined to reclaim everything he took from her. Opportunity arrives in the form of her deceptive twin sister, Taryn, whose mortal life is in peril.

Jude must risk venturing back into the treacherous Faerie Court, and confront her lingering feelings for Cardan, if she wishes to save her sister. But Elfhame is not as she left it. War is brewing. As Jude slips deep within enemy lines she becomes ensnared in the conflict's bloody politics.

And, when a dormant yet powerful curse is unleashed, panic spreads throughout the land, forcing her to choose between her ambition and her humanity...

ABOUT THE AUTHOR:
Holly Black is the bestselling author of contemporary fantasy novels for teens and children, including The Folk of the Air trilogy, Tithe: A Modern Faerie Tale and the #1 New York Times bestselling Spiderwick series. She has been a finalist for the Eisner Award, and the recipient of the Andre Norton Award and Mythopoeic Award. Holly lives in Massachusetts with her husband, Theo, in a house with a secret library. Her website is www.blackholly.com.

The Wicked King (The Folk of the Air #2) (Hardcover)

The Cruel Prince (The Folk of the Air #1) (Paperback)