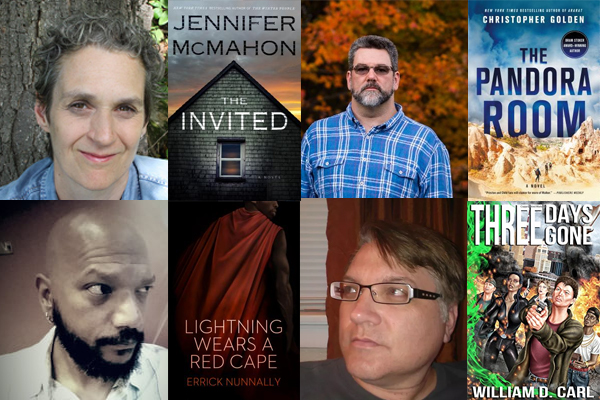 Halloween is coming, so it’s time for scary stories! We have a whole line-up of authors with spooky tales to chill your bones. For this year’s Halloween Horror panel, we welcome Jennifer McMahon, Christopher Golden, Errick Nunnally, and our very own William D. Carl. Each author will discuss their books, what inspired them to write in the horror genre, and share creepy stories guaranteed to keep you up at night! A Q&A and book signing will follow. Beer and wine will be available for purchase.

ABOUT THE AUTHORS:
Jennifer McMahon is the author of nine novels, including the New York Times bestsellers Promise Not to Tell and The Winter People. She graduated from Goddard College and studied poetry in the Master of Fine Arts Writing program at Vermont College. She lives in Vermont with her partner, Drea, and their daughter, Zella.

Christopher Golden is the award-winning New York Times bestselling author of, among other books, Snowblind, The Myth Hunters, Wildwood Road, The Boys Are Back in Town, and Of Saints and Shadows. His first novel with Mike Mignola, Baltimore, or, The Steadfast Tin Soldier and the Vampire, was the launch pad for the cult favorite comic book series Baltimore. He has also edited short-story anthologies and written comic books, video games, screenplays, online animated series, and a network television pilot. Golden was born and raised in Massachusetts, where he lives with his family.

Born and raised in Boston, Massachusetts, Errick Nunnally served one tour in the Marine Corps before deciding art school would be a safer--and more natural--pursuit. He strives to develop his strengths in storytelling and remains permanently distracted by art, comics, science fiction, history, and horror. Trained as a graphic designer, he has earned a black belt in Krav Maga with Muay Thai kickboxing after dark. Errick's successes include: the novel, Blood For The Sun; Lightning Wears A Red Cape, with ChiZine Publications; a comic strip collection, Lost in Transition; and first prize in one hamburger contest. He also has two lovely children and one beautiful wife.

William D Carl lives in Pawtucket, R.I., and is a horror/thriller novelist. His first book, BESTIAL (Book one in the Werewolf Apocalypse Saga) is now available from Simon and Schuster. Book 2, PRIMEVAL, has also been released. Look for his Euro-horror homage THE SCHOOL THAT SCREAMED from Necon e-book contemporary horror as well as his terrifying OUT OF THE WOODS from Post Mortem Press. His new series, GONE NOIR, has just commenced with the first book, THREE DAYS GONE, which follows the adventures of a private detective who gets all the weirdest cases in Cincinnati, Ohio. He has published short fiction in over thirty anthologies and magazines, and he writes a column called Bill's Bizarre Bijou for Cinema Knife Fight in which he talks about the strangest movies you've never seen. He lives with his partner of 27 years and one rather large hound dog.

The Pandora Room: A Novel (Hardcover)

The Invited: A Novel (Hardcover)

By Errick Nunnally
Email or call for price.
ISBN: 9781771485128
Availability: Not Available at This Time
Published: Chizine Publications - November 12th, 2019