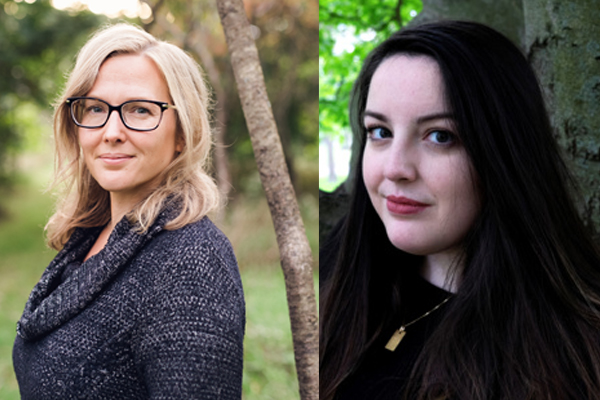 YA authors Jennifer Dugan and Rory Power are chatting with An Unlikely Story at a virtual event on Crowdcast. They'll discuss Jennifer's recent book VERONA COMICS, Rory's upcoming book BURN OUR BODIES DOWN, their shared love of reality dating shows, and more!

ABOUT VERONA COMICS:
From the author of Hot Dog Girl comes a fresh and funny queer YA contemporary novel about two teens who fall in love in an indie comic book shop.

Jubilee has it all together. She's an elite cellist, and when she's not working in her stepmom's indie comic shop, she's prepping for the biggest audition of her life.

Ridley is barely holding it together. His parents own the biggest comic-store chain in the country, and Ridley can't stop disappointing them--that is, when they're even paying attention.

They meet one fateful night at a comic convention prom, and the two can't help falling for each other. Too bad their parents are at each other's throats every chance they get, making a relationship between them nearly impossible . . . unless they manage to keep it a secret.

Then again, the feud between their families may be the least of their problems. As Ridley's anxiety spirals, Jubilee tries to help but finds her focus torn between her fast-approaching audition and their intensifying relationship. What if love can't conquer all? What if each of them needs more than the other can give?

ABOUT BURN OUR BODIES DOWN:
From the author of the New York Times bestseller Wilder Girls comes a new twisty thriller about a girl whose past has always been a mystery--until she decides to return to her mother's hometown . . . where history has a tendency to repeat itself.

Ever since Margot was born, it's been just her and her mother. No answers to Margot's questions about what came before. No history to hold on to. No relative to speak of. Just the two of them, stuck in their run-down apartment, struggling to get along.

But that's not enough for Margot. She wants family. She wants a past. And she just found the key she needs to get it: A photograph, pointing her to a town called Phalene. Pointing her home. Only, when Margot gets there, it's not what she bargained for.

Margot's mother left for a reason. But was it to hide her past? Or was it to protect Margot from what's still there?

The only thing Margot knows for sure is there's poison in their family tree, and their roots are dug so deeply into Phalene that now that she's there, she might never escape.

ABOUT THE AUTHORS:
Jennifer Dugan is a writer, a geek, and a romantic who writes the kinds of stories she wishes she had growing up. Her debut young adult novel Hot Dog Girl was called "a great fizzy rom-com" by Entertainment Weekly and "one of the best reads of the year, hands down" by Paste Magazine. She is also the writer/creator of two indie comics. She lives in upstate New York with her family, her dogs, and an evil cat that is no doubt planning to take over the world.

Rory Power grew up in Boston, received her undergraduate degree at Middlebury College, and went on to earn an MA in prose fiction from the University of East Anglia. She lives in Massachusetts. She is the New York Times bestselling author of Wilder Girls and Burn Our Bodies Down.

Burn Our Bodies Down (Hardcover)