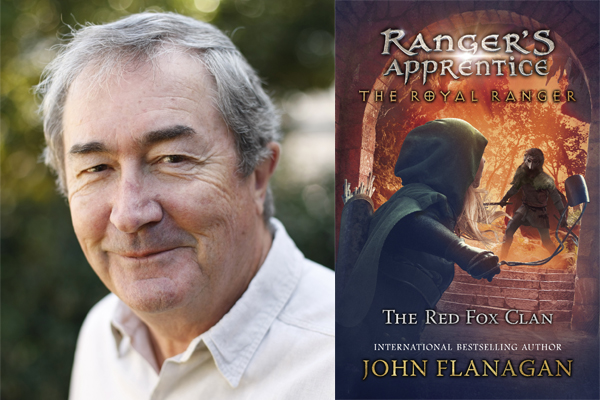 An Unlikely Story is proud to welcome the one and only worldwide best-selling author John Flanagan to speak and sign his latest book THE RED FOX CLAN, where he returns to the world of Ranger's Apprentice with fan favorites, Will and Maddie from THE ROYAL RANGER: A NEW BEGINNING. John will talk about all things Ranger's Apprentice, answer audience questions, and sign books! It's an event not to be missed!

ABOUT THE BOOK:
Picking up where The Royal Ranger: A New Beginning left off, this next installment continues the story arc featuring young apprentice, Maddie, and the student-turned-master, Will Treaty. The time has come for the next generation to assume the mantle and become protectors of the kingdom of Araluen.

After passing her third-year assessment as a ranger's apprentice, Maddie is called home to Castle Araluen. Forced to keep her ranger training a secret, Maddie feels trapped by the monotony of castle life and longs to find a way out. But there are whisperings of a new threat to the kingdom. The mysterious Red Fox Clan, a group of anarchists all donning fox masks, have threatened Castle Araluen and question Princess Cassandra and Madelyn's succession to the throne. Will they succeed in unseating Cassandra and Madelyn and take the throne for themselves?

The bestselling author of the Ranger's Apprentice and Brotherband series, John Flanagan, returns in the captivating follow-up to The Royal Ranger: A New Beginning. Perfect for fans of Tolkien, Redwall, and Game of Thrones!

ABOUT THE AUTHOR:
John Flanagan grew up in Sydney, Australia, hoping to be a writer, and after a successful career in advertising and television, he began writing a series of short stories for his son, Michael, in order to encourage him to read. Those stories would eventually become The Ruins of Gorlan, Book 1 of the Ranger’s Apprentice epic. Now with his companion series, Brotherband, the novels of John Flanagan have sold millions of copies and made readers of kids the world over. Mr. Flanagan lives in the suburb of Mosman, Australia, with his wife. In addition to their son, they have two grown daughters and four grandsons. Visit him online at www.worldofjohnflanagan.com.