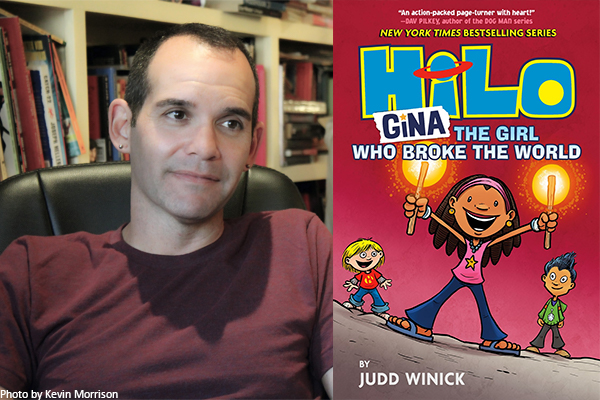 Judd Winick, creator of the award-winning HILO series, joins DIARY OF A WIMPY KID author Jeff Kinney to introduce the HILO 7: GINA, THE GIRL WHO BROKE THE WORLD. HILO is a smash hit, and in this newest entry in the series, Hilo and DJ’s best friend and reader favorite Gina is discovering her own magical powers! Judd and Jeff will talk about all things HILO, creating graphic novels, and answer fans questions. Judd has signed very cool HILO bookplates for those purchasing HILO 7: GINA, THE GIRL WHO BROKE THE WORLD from us. Don't miss out on what's sure to be a hilarious one-of-a-kind event!

ABOUT THE BOOK:
"An action-packed page turner with heart!"--Dav Pilkey, author of DOGMAN

Hundreds of years ago, MAGIC disappeared from Earth. At least...UNTIL NOW. Because suddenly, giant magical beings are appearing and only GINA can see them. Not to mention, Gina can somehow do magic herself. Magic is powerful. But it can also be DANGEROUS. With DJ and HILO's help, can Gina figure out how to protect the magical beings from the creatures who are after them? AND how to use her magic to become who she was always meant to be? And can she do it WITHOUT putting the entire PLANET in JEOPARDY?! Find out in Hilo 7--a laugh-out-loud, action packed adventure filled with epic battles! friendship! annoying older brothers! annoying older sisters! good guys! bad guys! inappropriate jokes! mangoes! magic! and much, much more!

Here's what people (and robots!) are saying about Hilo!

"Every kid would love a pal like Hilo, and every kid will LOVE this book!" --Lincoln Peirce, author of Big Nate series

"A story that can be enjoyed by the entire family." --New York Times

ABOUT THE AUTHOR:
JUDD WINICK lives in San Francisco with his wife and their two kids. Judd has written bestselling comic book series, appeared as a cast member of MTV's The Real World: San Francisco and is the author of the acclaimed graphic novel Pedro and Me, about his Real World friend, AIDS activist Pedro Zamora. Visit Judd and Hilo online at juddspillowfort.com or find him on Twitter at @JuddWinick.