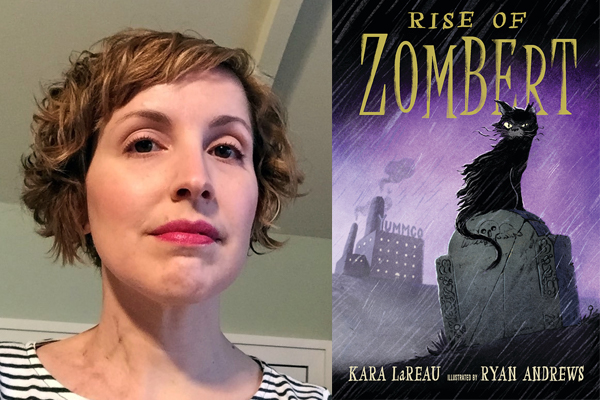 The author of the award winning INFAMOUS RATSOS gives rise to a new series, THE RISE OF ZOMBERT, a funny middle grade mystery about two best friends who find what they believe to be a zombie cat. At a virtual event, live on Crowdcast, author Kara LaReau talks about THE RISE OF ZOMBERT, horror flicks, pets, and what Zombert’s next adventures might look like.

When you purchase Kara's new book, THE RISE OF ZOMBERT, from An Unlikely Story you will receive a signed bookplate, while supplies last.

ABOUT THE BOOK:
Could Bert really be a zombie cat? Two friends put their brains together to find out in a wry new mystery series.

While helping her best friend, Danny, film his latest horror flick, Mellie discovers a scraggly cat behind a dumpster outside the YummCo Foods factory. Mellie names the stray Bert and hides him in her room, knowing her parents won’t let her keep him. But soon Bert has decapitated all her stuffed animals, and before long he is leaving the headless corpses of birds and mice as gifts for her. Danny is convinced the cat is a zombie, living on the brains of his victims. But is that what is really going on? Award-winning author Kara LaReau lets loose a fresh and sharply funny new mystery series, with an irresistible touch of the macabre. Fans of creepy stories and animal lovers alike will devour this fast-moving first episode in one gulp.

The Infamous Ratsos Camp Out (Hardcover)

The Infamous Ratsos Are Not Afraid (Paperback)