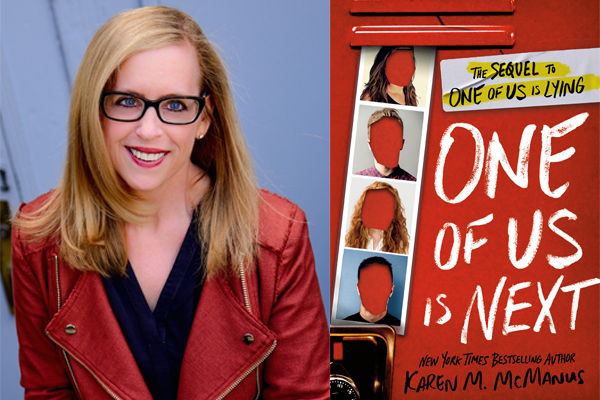 Catch a killer with YA mystery author Karen McManus! The New York Times bestselling author is discussing ONE OF US IS NEXT, the pulse-pounding sequel to ONE OF US IS LYING. After her talk, Karen will answer audience questions and sign copies of her books.

ABOUT THE BOOK:
The highly anticipated sequel to the New York Times bestselling thriller everyone is talking about, One of Us Is Lying! There's a new mystery to solve at Bayview High, and there's a whole new set of rules.

Come on, Bayview, you know you've missed this.

A ton of copycat gossip apps have popped up since Simon died, but in the year since the Bayview four were cleared of his shocking death, no one's been able to fill the gossip void quite like he could. The problem is no one has the facts.

This time it's not an app, though—it's a game. Truth or Dare. Phoebe's the first target. If you choose not to play, it's a truth. And hers is dark. Then comes Maeve and she should know better—always choose the dare. But by the time Knox is about to be tagged, things have gotten dangerous. The dares have become deadly, and if Maeve learned anything from Bronwyn last year, it's that they can't count on the police for help. Or protection.
Simon's gone, but someone's determined to keep his legacy at Bayview High alive. And this time, there's a whole new set of rules.

“Pretty Little Liars meets The Breakfast Club....so make room for One of Us Is Lying in your bags, because this is one carry-on you won’t want to put down." —EW.com

“You’ll tear through this juicy, super-fun (if murder can ever be fun?) thriller."—Bustle.com

"A whodunit with a Breakfast Club twist...following four unique voices on a chase to find the killer, this one will keep you guessing until the very, very end."—Popcrush

ABOUT THE AUTHOR:
Karen M. McManus earned her BA in English from the College of the Holy Cross and her MA in journalism from Northeastern University. She is the New York Times bestselling author of One of Us Is Lying, Two Can Keep a Secret, and, coming January 2020, One of Us Is Next. Her work has been published in more than 40 countries. To learn more about Karen and her books, visit karenmcmanus.com, or follow @writerkmc on Twitter and Instagram.

One of Us Is Lying (Hardcover)

Two Can Keep a Secret (Hardcover)