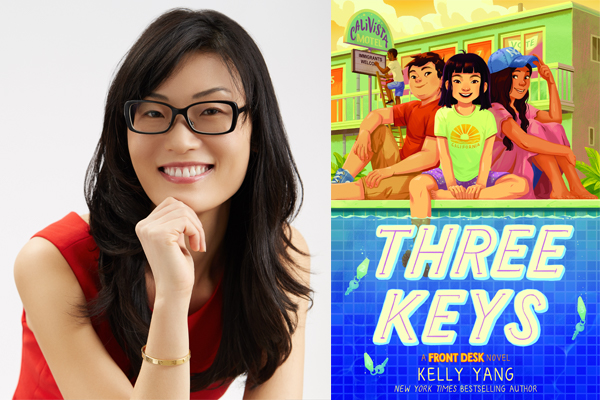 Kelly Yang's first book, 2019 Asian/Pacific American Award winner FRONT DESK, became one of our all-time faves, and we eagerly awaited the sequel, THREE KEYS. We're delighted to welcome Kelly for an event with Jeff Kinney to talk about Kelly's books and her life growing up in a motel managed by her immigrant parents, where she often spent time translating at the front desk. Following their discussion, Kelly will answer audience questions.

When you purchase Kelly's new book, THREE KEYS, from An Unlikely Story you will receive a signed bookplate and THREE KEYS poster, while supplies last. In order to receive your bookplate and poster, please include that you would like them in the “order comments” section when checking out on our website.

ABOUT THE BOOK:
The story of Mia and her family and friends at the Calivista Motel continues in this powerful, hilarious, and resonant sequel to the award-winning novel Front Desk.

Mia Tang thinks she's going to have the best year ever.

She and her parents are the proud owners of the Calivista Motel, Mia gets to run the front desk with her best friend, Lupe, and she's finally getting somewhere with her writing!

But as it turns out, sixth grade is no picnic...
1. Mia's new teacher doesn't think her writing is all that great. And her entire class finds out she lives and works in a motel!
2. The motel is struggling, and Mia has to answer to the Calivista's many, many worried investors.
3. A new immigration law is looming and if it passes, it will threaten everything -- and everyone -- in Mia's life.

It's a roller coaster of challenges, and Mia needs all of her determination to hang on tight. But if anyone can find the key to getting through turbulent times, it's Mia Tang!

ABOUT THE AUTHOR:
Kelly Yang is the author of Front Desk, which won the 2019 Asian/Pacific American Award for Literature and was chosen a Best Book of the Year by multiple publications, including NPR, the Washington Post, and the New York Public Library. Kelly's family immigrated to the United States from China when she was a young girl, and she grew up in California, in circumstances very similar to those of Mia Tang. She eventually left the motels and went to college at the age of 13, and is a graduate of UC Berkeley and Harvard Law School. She is the founder of The Kelly Yang Project, a leading writing and debating program for children in Asia and the United States. Her writing has been published in the South China Morning Post, the New York Times, the Washington Post, and the Atlantic. To learn more about her and the Front Desk books, visit frontdeskthebook.com.