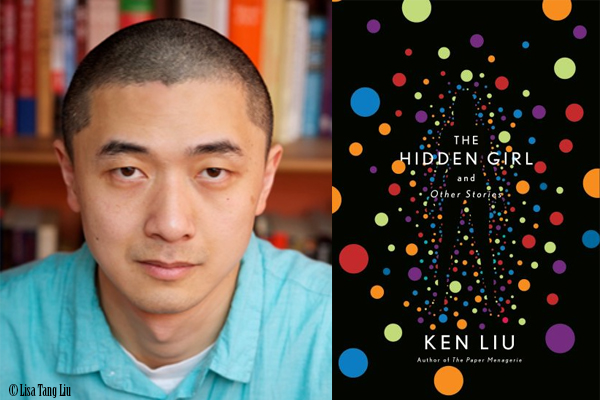 Nebula and Hugo award-winning science fiction and fantasy author Ken Liu comes to An Unlikely Story with stories about the future with themes that resonate today. At the event, Ken talks about his newest collection, THE HIDDEN GIRL AND OTHER STORIES, answers questions, and sign books. Beer and wine will be available for purchase.

ABOUT THE BOOK:
From award-winning author Ken Liu comes his much anticipated second volume of short stories.

Ken Liu is one of the most lauded short story writers of our time. This collection includes a selection of his science fiction and fantasy stories from the last five years—sixteen of his best—plus a new novelette.

In addition to these seventeen selections, The Hidden Girl and Other Stories also features an excerpt from book three in the Dandelion Dynasty series, The Veiled Throne.

ABOUT THE AUTHOR:
Ken Liu is one of the most lauded authors in the field of American literature. A winner of the Nebula, Hugo, World Fantasy, Locus Sidewise, and Science Fiction & Fantasy Translation Awards, he has also been nominated for the Sturgeon and Locus Awards. His short story, “The Paper Menagerie,” is the first work of fiction to simultaneously win the Nebula, Hugo, and World Fantasy Awards. He also translated the 2015 Hugo Award–winning novel The Three-Body Problem, written by Cixin Liu, which is the first novel to ever win the Hugo award in translation. The Grace of Kings, his debut novel, is the first volume in a silkpunk epic fantasy series set in a universe he and his wife, artist Lisa Tang Liu, created together. It was a finalist for a Nebula Award and the recipient of the Locus Award for Best First Novel. He lives near Boston with his family.