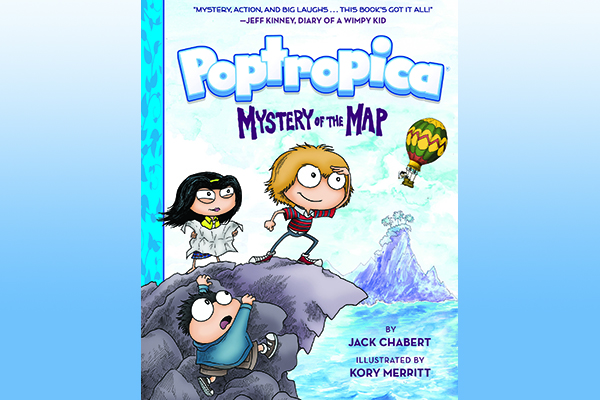 Jeff Kinney hosts Kory Merritt as we celebrate the release of Poptropica: Mystery of the Map!  Kory will be here to talk about the book and sign copies, and when Jeff's involved, there's always some fun mayhem!

This event requires registration, which will go live here on February 25th!

Based on a concept by Wimpy Kid author Jeff Kinney comes Poptropica, a brand-new graphic novel adventure series by Jack Chabert and Kory Merritt. In Mystery of the Map, Oliver, Mya, and Jorge take a ride in a hot-air balloon, only to crash-land on an unknown island filled with extinct animals and a horde of angry Vikings. Welcome to Poptropica, an uncharted group of islands whose existence is hidden from the rest of the world. As the three friends embark on a perilous search for a way home, they quickly discover the shocking reason they were brought there—something that threatens the very existence of Poptropica and their ability to ever make it off the island!

Kory Merritt, co-creator of Poptropica comics, started cartooning and illustrating while attending SUNY Brockport. His weekly comic strip Brockport Chronicled won the John Locher Memorial Award for cartooning. He is also the author of the online comic strip The Lost Side of Suburbia and the upcoming illustrated series The Dreadful Fate of Jonathan York. Merritt lives in Hammondsport, New York, where he teaches art for grades K–6.

By Jack Chabert, Kory Merritt (Illustrator), Jeff Kinney (From an idea by)
$9.95

The Dreadful Fate of Jonathan York: A Yarn for the Strange at Heart (Paperback)