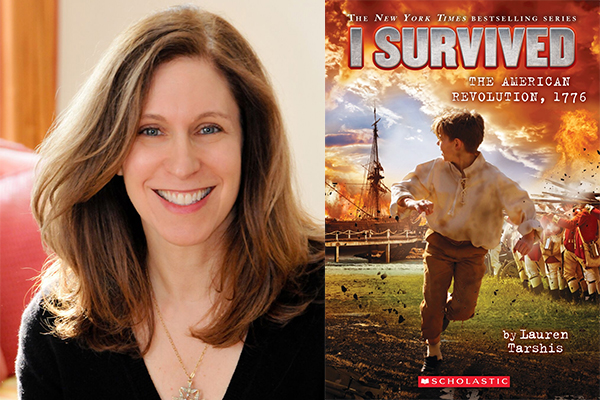 Lauren Tarshis, acclaimed and bestselling author of the I Survived series, will be at An Unlikely Story to discuss and sign her newest book in the series brings us to the war that brought the United States its independence in I Survived the American Revolution, 1776. Lauren's New York Times bestselling I Survived series tells stories of young people and their resilience and strength in the midst of unimaginable disasters. Lauren has brought her signature warmth and exhaustive research to topics such as the September 11 attacks, the destruction of Pompeii, Hurricane Katrina, and the bombing of Pearl Harbor, among others.

ABOUT THE BOOK:
The battlefield was soaked in blood. Screams of injured soldiers rang through the air. Eleven-year-old Nathaniel Knox knelt behind a rock, his gun clutched in his shaking hands. Nate had been heading to New York City to find his father. But now he was trapped in a terrible gunfight between American and British troops.
This Revolutionary War had started as a thrilling fight for freedom. The 13 American colonies were breaking apart from England, away from King George III. The colonies would band together to become a brand-new country: The United States of America!
But King George was like a snake with America gripped in his fangs - and he didn't want to let go. So now it was war - brutal, bloody war. And America was being crushed by the mighty British army. Thousands of American troops were either dead or dying in filthy British prison ships. General George Washington's army was in tatters.
All Nate wanted was to find his father...and to get out of here alive.

ABOUT THE AUTHOR:
Lauren Tarshis is the author of the New York Times bestselling I Survived series. Each of these historical fiction books focuses on an iconic event from history, and tells the story through the eyes of a child who was there. The theme of the series is resilience: how human beings can struggle through even the most difficult experiences and somehow not simply survive but heal — and ultimately thrive. The series includes more than 13 historical fiction books plus two I Survived True Stories collections of narrative nonfiction. The True Stories titles feature real children from history and today facing extraordinary events. Lauren is also the author of the critically acclaimed Emma-Jean Lazarus Fell Out of a Tree, a Golden Kite honor book for fiction and Oprah book club pick, and the sequel Emma-Jean Lazarus Fell in Love. The books are on many state lists and are often used by schools as part of anti-bully programs. In addition to writing books, Lauren is VP, Editorial Director of Language Arts for Scholastic’s Classroom Magazine Division. She is the long-time editor of Scholastic Storyworks magazine, an award-winning multi-genre language arts magazine read by more than 1 million children in their fourth and fifth grade classrooms.