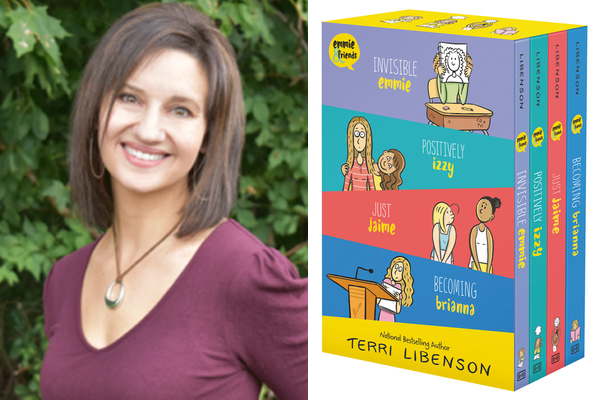 ABOUT THE BOOKS:
Four full-color graphic-novel hybrid books in the bestselling Emmie & Friends series from award-winning and bestselling author and cartoonist Terri Libenson! A great gift for the middle school graphic novel fan in your life.

Invisible Emmie is the story of quiet, shy, artistic Emmie and popular, outgoing, athletic Katie, and how their lives unexpectedly intersect one day, when an embarrassing note falls into the wrong hands. . . .

In Positively Izzy, we meet Bri, the brain, and Izzy, the dreamer. On the day of the school talent show, the girls’ lives converge in ways more dramatic than either of them could have imagined.

Just Jaime introduces us to two friends, Maya and Jaime, on their last day of seventh grade and just maybe the last day of their friendship if they can’t figure out who is a real friend and who is a frenemy.

Told in alternating past and present chapters, Becoming Brianna unfolds over the eight months leading up to one eventful day—as well as over the course of the big day itself.

ABOUT THE AUTHORS:
Terri Libenson grew up in Kingston, Pennsylvania, where she made up puzzles and games and forced her friends to solve them (her mazes were the talk of town!). Sadly, she set aside these mad skills in order to build a cartooning career. Terri is the award-winning cartoonist of the syndicated comic strip The Pajama Diaries and the bestselling author of the Emmie & Friends series. Terri lives with her husband and two daughters in Cleveland, Ohio. You can find her online at www.terrilibenson.com.

Victoria Jamieson is the creator of the graphic novels All's Faire in Middle School and Newbery Honor winner Roller Girl. She received her BFA in illustration from the Rhode Island School of Design and worked as a children's book designer before becoming a freelance illustrator. She has also worked as a portrait artist aboard a cruise ship, and has lived in Australia, Italy, and Canada. Now she lives in Pennsylvania with her husband and son.

When Stars Are Scattered (Paperback)