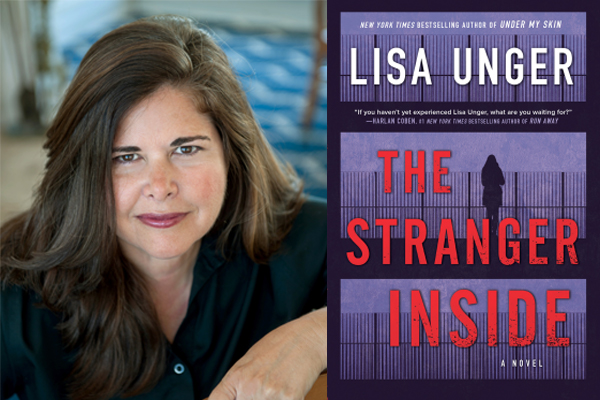 Come inside…if you dare! Thriller author Lisa Unger will be talking about her new book, THE STRANGER INSIDE with investigative reporter and author of THE MURDER LIST, Hank Phillippi Ryan. THE STRANGER INSIDE dives into the minds of a victim and of a killer, combining a rich depth of character and plenty of heart-racing tension. A Q&A and book signing will follow Lisa and Hank’s discussion.

ABOUT THE BOOK:
Lisa Unger is a major bestselling and award winning thriller author whose books have been published in over twenty countries worldwide and are perfect for fans of Lisa Gardner and Karin Slaughter. Her latest, The Stranger Inside, is a dark psychological thriller about a woman forced to confront the dark secrets of her past when a serial killer strikes too close to home. Introducing one of the most compelling serial killers in crime fiction today, and exploring the very fine line between good and evil, this is a top-notch thriller from a beloved author at the top of her game.

There’s a stranger inside all of us…

Twenty years ago, Rain Winter narrowly escaped an abduction while walking to a friend’s house. Her two best friends, Tess and Hank, were not as lucky. Tess never came home, and Hank was held in captivity for days before managing to escape. Their abductor was eventually sent to prison and years later was released. Then someone took justice into their own hands and killed him in cold blood.

Now moved on, living the perfect suburban life, Rain spends her days as a stay-at-home mom, having put aside her career as a hard-hitting journalist to care for her infant daughter. But when a man who was acquitted of murdering his wife is found dead, Rain is unexpectedly drawn into the case--forced to revisit the tragic past that she had long ago buried. Could the two murders be connected? Is there a vigilante at work? Who is the next target?

Introducing one of the most compelling and original serial killers in crime fiction today, Lisa Unger takes readers deep inside the minds of both killer and victim, blurring the lines between right and wrong, crime and justice, and tracing the boundaries where even good people are drawn to do evil things.

ABOUT THE AUTHOR:
Lisa Unger is a New York Times and international bestselling, award-winning author. Her books are published in 26 languages worldwide, have sold over a million copies and have been named "Best of the Year" or top picks by the Today show, Good Morning America, Entertainment

The Stranger Inside (Hardcover)

Under My Skin (Mass Market Paperbound)