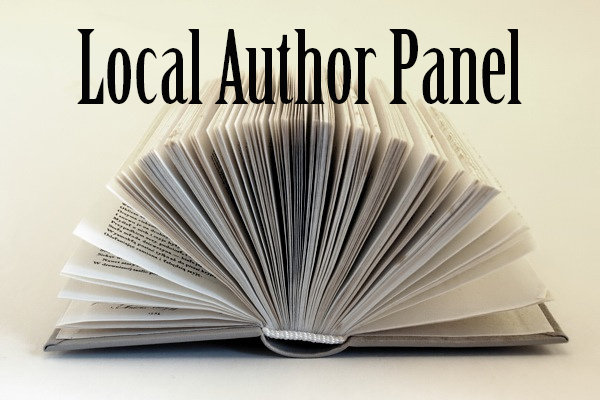 An Unlikely Story is thrilled to present another local author panel highlighting 11 amazing local authors from the area. Show your support and swing by the Second Story where each author will present and discuss their books in YA, and Adult. This is the perfect opportunity to meet the authors in the area and discuss how to become self-published. The authors attending the event are listed below. 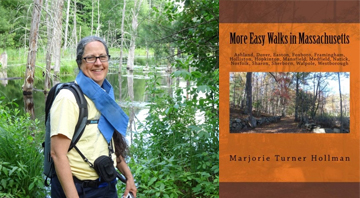 Marjorie Turner Hollman is a personal historian who loves the outdoors, and is the author of Easy Walks in Massachusetts, 2nd edition More Easy Walks in Massachusetts, and editor of Easy Walks and Paddles in the Ten Mile River Watershed. She has been a freelance writer for numerous local, regional and national publications for the past 20 years, and has recorded multiple veteran's oral histories, now housed at the Library of Congress. For more information about Marjorie and her books visit marjorieturner.com/easy-walks. 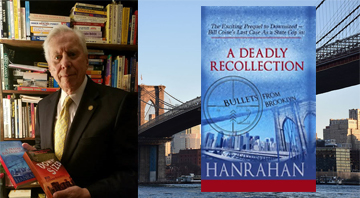 David G. Hanrahan was born in Brooklyn, New York in 1936. He graduated from Pratt Institute in Brooklyn with a Bachelor's Degree in Industrial Design in 1958. He received the Organization of the Army medal and was designated a Distinguished Military Graduate. While in the Army, Hanrahan graduated from the Airborne School at Fort Benning, Georgia and the Jungle Warfare School in Fort Sherman, Panama Canal Zone. In 1962, while stationed in the Panama Canal Zone, he was honored by the people of a small Panamanian town for helping them achieve their dream of a new school. The inauguration of the "Lieutenant David G. Hanrahan School.- Amistad -Panama -Estados Unidos" was attended by the President of Panama, the American Ambassador to Panama and the senior army staff.  After 5 years in the United States Army, attaining the rank of Captain, he attended Boston University Law School where he received his Juris Doctor Degree in 1966. Hanrahan, a distinguished trial attorney, is a member of the Boston and Massachusetts Bar Associations and is a fellow in the American College of Trial Lawyers. He is a member of the Barbershop Harmony Society and for the last 15 years has sung lead in a barbershop quartet “Spindrift." Now, writing suspenseful and riveting courtroom novels occupies an important part of his life. 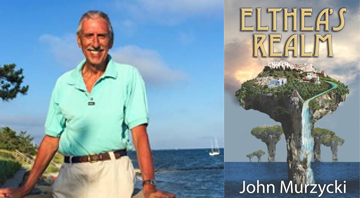 John Murzycki has crafted messages for organizations ranging from international brands to technology startups. That is until he decided the time had finally come to pen a story he could call his own. After leaving a job as a high-tech marketing and sales manager, he concentrated on his true love of writing fiction. He published his debut novel, Elthea’s Realm in 2017 and Elthea’s Gambit in 2018. He writes about magical places that have roots in the technology of our world. His characters are unlikely heroes who struggle with frailties and imperfections as they face malevolent forces. Many of his plot ideas stem from the unintended consequences of technology. “What if…” was a thought that persisted and found its way into his writing. He is currently writing the next book in The Story of Elthea’s Realm series. ​John makes his home in Wrentham, Massachusetts. Visit johnmurzycki.com for more information. 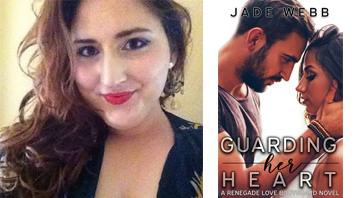 Jade Webb is a lover of romance novels that feature strong heroines who know that the loves that may come into their lives are always the icing, and never the cake. Jade has loved romance novels since she was a teen, sneaking them into her Bible studies at her all-girls Catholic school. Thanks to her own marriage, she has learned that the challenges of life can only help to make love stronger and is grateful to her partner for embodying all the magic that love can offer. When Jade is not writing or dreaming up new love stories, she is working in a retirement community outside of Boston that provides her with enough writing material for ten lifetimes. Jade is a proud member of Romance Writers of Rhode Island and the New England Chapter of Romance Writers of America. Visit her website at jadewebb.com. 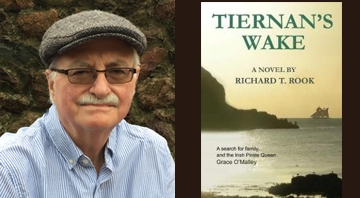 Richard Rook started writing in 2015, after spending forty years as a practicing attorney and about twenty years as a part-time consulting genealogist. His published short stories won several awards, but they were a tune-up for Tiernan's Wake and the series it will become. What other novel will you ever read that combines real-life pirates, genealogy, the immigrant experience, law, Elizabethan history and art, an actual Irish historical mystery, ancestral spirits, spies, Nazis, parochial school trauma, Sherlock Holmes, the complexities of adult friendships, and the true meaning of family? In 1964, an inspirational high school English teacher and his Pulitzer Prize winning novelist friend asked a class to promise that someday each of us would try to write a novel. It took him more than fifty years to start, but better late than never. Rook lives outside Boston, Massachusetts with his wife Dyan, an artist and documented direct descendant of a female pirate who appears in the novel. Being 73% Irish, Rook considers himself an Irish-American writer. 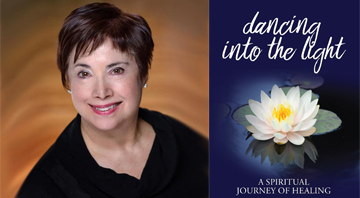 Arlyn Hope Halpern is a psychotherapist in a private practice. She holds a Masters in Dance and previously was a dance instructor at Naropa Institute in Boulder, Colorado. She began the study of Buddhism under the tutelage of Chogyam Trungpa, Rinpoche in 1971. She resides outside of Boston with her husband. For more information about Arlyn and Dancing into the Light visit www.arlynhalpern.com.

Amy Bartelloni is a reader, writer, coffee addict, fangirl, eternal optimist, and self identified Ravenclaw. Name a geek fandom and she’s probably in it.  She loves books, both reading and writing them.  Some of her favorite authors include Neil Gaiman, Jasper Fforde, Paulo Coelho, and Stephen King.  Her writing tends to stay in the sci/fi or fantasy genre for now, but you never know what the future holds! For more information about Amy and her books visit www.amybartelloni.com. 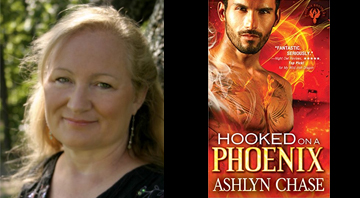 Ashlyn Chase was a registered nurse for 20 years. During those years she wrote articles for professional journal and a thesis, but eventually, thank goodness, discovered the joy and freedom of writing fiction. Ashlyn considers herself lucky.  Her degree in behavioral sciences is a combination of psychology and sociology, so she has studies people most of her life. She doesn’t have to write out exhaustive character sketches to understand her characters or predict how they will behave. The doesn’t mean they don’t surprise her. Sometimes they take her on grand unexpected journeys. Her identified theme involves characters who reinvent themselves. For more information about Ashlyn and her books visit www.ashlynchase.com. 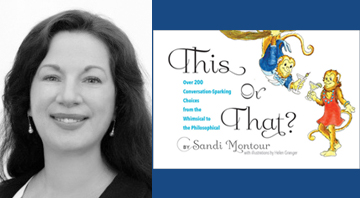 Sandi Montour is a lifelong adventurer, and her insatiable curiosity has been the driving force behind her explorations and discoveries. From a childhood spent building tree houses, riding her bicycle, and reading — and dreaming — about faraway, magical lands, to chasing the Northern Lights in Iceland, riding camels in Egypt and elephants in Thailand, trekking through the jungle in Costa Rica, and pursuing dozens of other excursions throughout the globe as an adult, her key goals in life have been to seek adventure and make a difference. Her book This or That? is a fun way to better know yourself and others. Enjoy it on a road trip, when hanging out with friends, at school or camp, as an office icebreaker, or even while waiting for an appointment. Visit her website at thisorthatbook.com. 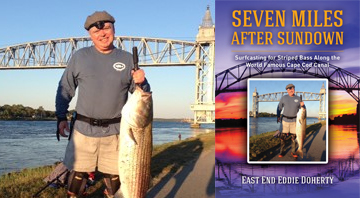 Eddie Doherty fished the East End of the Cape Cod Canal so often that other fishermen started calling him East End Eddie. Thus, a nick name and pen name were born together. Doherty is a graduate of Dominican Academy and the University of South Florida. He worked for almost 37 years in the Massachusetts Court system where he became the youngest Assistant Clerk-Magistrate in the state at age 25 for the Attleboro District Court before being appointed 18 years later to the lifetime position of Clerk-Magistrate of the Wrentham District Court by His Excellency, A. Paul Cellucci, Governor of the Commonwealth. The author has fished the warm currents of the Gulf of Mexico as well as the powerful Atlantic surf pounding the rugged coast of Maine. He has surf cast along the striper coast all the way down to the clear tropical inlets of the Florida Keys. His cousins in Ireland took him from Ballyjamesduff to the River Shannon where he wet a line in the same water that had sustained his ancestors with fish during the potato famine long ago. He has been privileged to have fished Sakonnet with Charley Soares, Chappaquiddick with D.J. Muller and the Cape Cod Canal with Patrick Kearney. Doherty has been published in Cape Cod Magazine, On The Water, The Fisherman Magazine, Cape Cod Times, The Boston Globe, The Sun Chronicle, Coastal Angler Magazine and the Congressional Record. He fishes in the Stan Gibbs Cape Cod Canal Fisherman’s Classic every year and his striped bass entry won the shore division in his first Buzzards Bay Anglers Club Fall Derby. He lives close to the Cape Cod Canal in Mattapoisett with his wife Joanne. 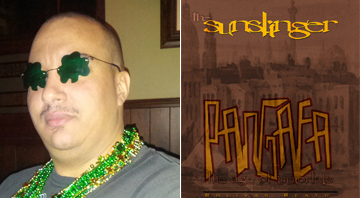 Bolivar Beato grew up in Rhode Island; Providence, Pawtucket and Central Falls when he decided to get into graphic design and write books. His series, Pangaea, is about a world being torn apart by magic, and an old evil is set to return. Its greatest champions are blinded by ambition, choked by politics, and crippled by pain. Brought together by fate, seven young heroes set out to save the world.