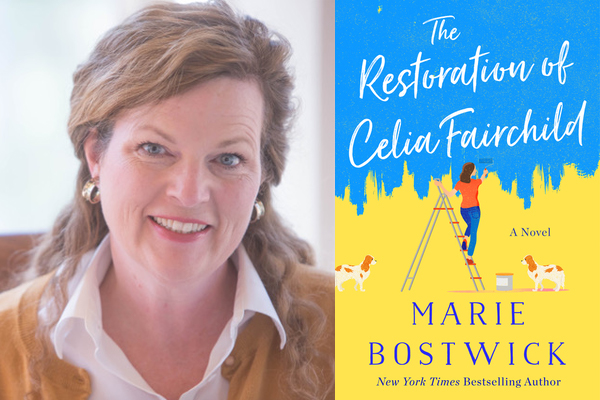 Beloved author Marie Bostwick, bestselling author of SECOND SISTER, which became a 2018 Hallmark Hall of Fame movie called CHRISTMAS EVERLASTING, is joining us to share her new feel-good and witty novel. THE RESTORATION OF CELIA FAIRCHILD is about a fired advice columnist who discovers lost and found family members while renovating her late, estranged aunt's house in Charleston. During the virtual event Marie will be in conversation with award-winning author Susan Beckham Zurenda. Save your spot below!

Marie has signed bookplates for everyone who purchases THE RESTORATION OF CELIA FAIRCHILD from An Unlikely Story, while supplies last. powered by Crowdcast

ABOUT THE BOOK:
Evvie Drake Starts Over meets The Friday Night Knitting Club in this wise and witty novel about a fired advice columnist who discovers lost and found family members in Charleston, by the New York Times bestselling author of The Second Sister.

Celia Fairchild, known as advice columnist ‘Dear Calpurnia’, has insight into everybody’s problems – except her own. Still bruised by the end of a marriage she thought was her last chance to create a family, Celia receives an unexpected answer to a “Dear Birthmother” letter. Celia throws herself into proving she’s a perfect adoptive mother material – with a stable home and income – only to lose her job. Her one option: sell the Charleston house left to her by her recently departed, estranged Aunt Calpurnia.

Arriving in Charleston, Celia learns that Calpurnia had become a hoarder, the house is a wreck, and selling it will require a drastic, rapid makeover. The task of renovation seems overwhelming and risky. But with the help of new neighbors, old friends, and an unlikely sisterhood of strong, creative women who need her as much as she needs them, Celia knits together the truth about her estranged family — and about herself.

The Restoration of Celia Fairchild is an unforgettable novel of secrets revealed, laughter released, creativity rediscovered, and waves of wisdom by a writer Robyn Carr calls "my go-to author for feel-good novels.”

ABOUT THE AUTHOR:
Marie Bostwick was born and raised in the northwest. In the three decades since her marriage, Marie and her family have moved frequently, living in eight different states at eighteen different addresses. These experiences have given Marie a unique perspective that enables her to write about people from all walks of life and corners of the country with insight and authenticity. Marie currently resides in Portland, where she enjoys writing, spending time with family, gardening, collecting fabric, and stitching quilts. Visit her at www.mariebostwick.com.

The Restoration of Celia Fairchild: A Novel (Paperback)