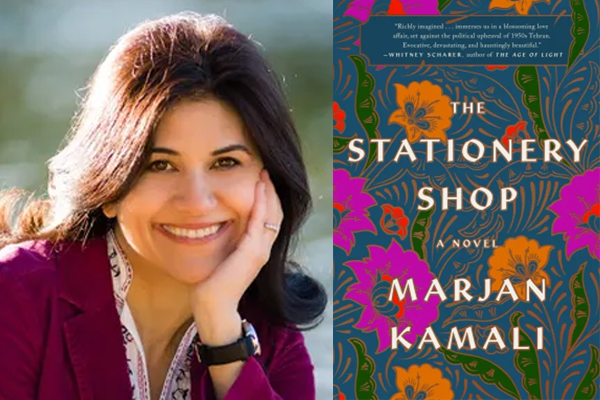 How do revolutions and uproar disrupt the lives of normal people? Marjan Kamali tackles this question in her moving novel, THE STATIONERY SHOP. Now, Marjan is coming to An Unlikely Story to celebrate THE STATIONERY SHOP’s paperback release! At the event, she’ll talk about this grand love story and its historical background, followed by a Q&A and a book signing. Beer and wine will be available for purchase.

ABOUT THE BOOK:
A poignant, heartfelt new novel by the award-nominated author of Together Tea—extolled by the Wall Street Journal as a “moving tale of lost love” and by Shelf Awareness as “a powerful, heartbreaking story”—explores loss, reconciliation, and the quirks of fate.

Roya, a dreamy, idealistic teenager living amid the political upheaval of 1953 Tehran, finds a literary oasis in kindly Mr. Fakhri’s neighborhood stationery shop, stocked with books and pens and bottles of jewel-colored ink.

Then Mr. Fakhri, with a keen instinct for a budding romance, introduces Roya to his other favorite customer—handsome Bahman, who has a burning passion for justice and a love for Rumi’s poetry—and she loses her heart at once. Their romance blossoms, and the little stationery shop remains their favorite place in all of Tehran.

A few short months later, on the eve of their marriage, Roya agrees to meet Bahman at the town square when violence erupts—a result of the coup d’etat that forever changes their country’s future. In the chaos, Bahman never shows. For weeks, Roya tries desperately to contact him, but her efforts are fruitless. With a sorrowful heart, she moves on—to college in California, to another man, to a life in New England—until, more than sixty years later, an accident of fate leads her back to Bahman and offers her a chance to ask him the questions that have haunted her for more than half a century: Why did you leave? Where did you go? How is it that you were able to forget me?

ABOUT THE AUTHOR:
Marjan Kamali, born in Turkey to Iranian parents, spent her childhood in Kenya, Germany, Turkey, Iran, and the United States. She holds degrees from UC Berkeley, Columbia University, and New York University. Her work has also been broadcast on BBC Radio 4 and published in two anthologies: Tremors and Let Me Tell You Where I’ve Been. An excerpt from The Stationery Shop was published in Solstice Literary Magazine and nominated for a Pushcart Prize. Her debut novel Together Tea was a Massachusetts Book Award Finalist, an NPR WBUR Good Read, and a Target Emerging Author Selection. Marjan lives with her husband and two children in the Boston area.