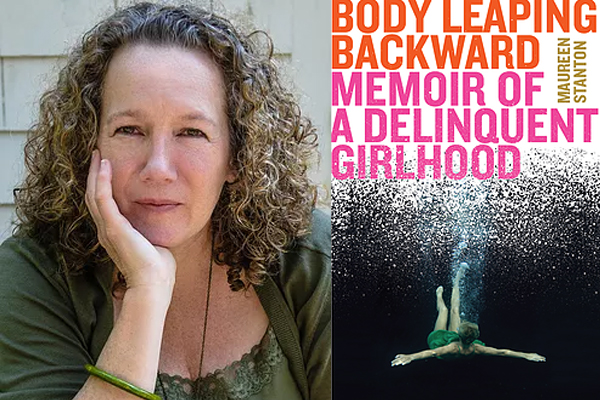 An Unlikely Story welcomes Maureen Stanton to introduce her memoir, BODY LEAPING BACKWARD: Memoir of a Delinquent Girlhood. In this book, Stanton recounts her risk-taking adolescence growing up in Walpole in the 1970s, where she slipped into delinquency—vandalism, breaking and entering—all while nearly erasing herself through addiction to angel dust, a homemade form of PCP that swept through Walpole in the wake of Nixon’s “total war” on drugs.  Finally, an unlikely mentor, Stanton’s coworker at a local gas station, helps rekindle her curiosity about the world of books and ideas, the first step toward reclaiming the moral self she’d nearly lost. Her talk will be followed by a Q & A and book signing.

ABOUT THE BOOK:
For Maureen Stanton’s proper Catholic mother, the town’s maximum security prison was a way to keep her seven children in line (“If you don’t behave, I’ll put you in Walpole Prison!"). But as the 1970s brought upheaval to America, and the lines between good and bad blurred, Stanton’s once-solid family lost its way. A promising young girl with a smart mouth, Stanton turns watchful as her parents separate and her now-single mother descends into shoplifting, then grand larceny, anything to keep a toehold in the middle class for her children. No longer scared by threats of Walpole Prison, Stanton too slips into delinquency—vandalism, breaking and entering—all while nearly erasing herself through addiction to angel dust, a homemade form of PCP that swept through her hometown in the wake of Nixon’s “total war” on drugs.

Body Leaping Backward is the haunting and beautifully drawn story of a self-destructive girlhood, of a town and a nation overwhelmed in a time of change, and of how life-altering a glimpse of a world bigger than the one we come from can be.

ABOUT THE AUTHOR:
MAUREEN STANTON, the author of Killer Stuff and Tons of Money, has been awarded the Iowa Review prize, a Pushcart Prize, the American Literary Review award in nonfiction, and fellowships from the National Endowment for the Arts. Stanton teaches at UMass Lowell.