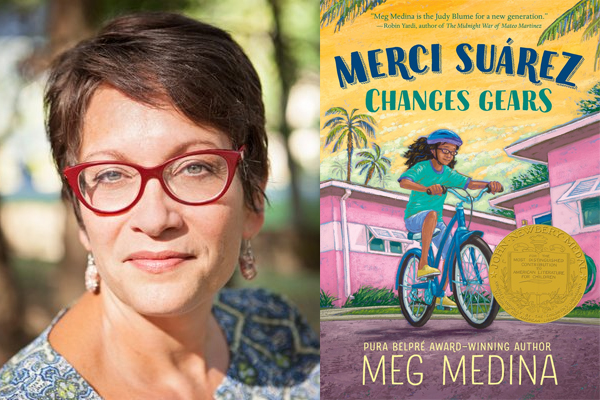 Listening to a good author speak is like riding a bike—you never forget! An Unlikely Story welcomes middle-grade author Meg Medina to talk about her 2019 Newbery award-winning book, MERCI SUAREZ CHANGES GEARS. In the book, sixth-grader Merci is trying to balance feeling alone at her private school and feeling confused at home about the strange changes in her grandfather’s behavior. At the event, Meg will talk about her thoughtful coming-of-age novel, answer audience questions, and sign books.

ABOUT THE BOOK:
Winner of the 2019 Newbery Medal

Thoughtful, strong-willed sixth-grader Merci Suarez navigates difficult changes with friends, family, and everyone in between in a resonant new novel from Meg Medina.

Merci Suarez knew that sixth grade would be different, but she had no idea just how different. For starters, Merci has never been like the other kids at her private school in Florida, because she and her older brother, Roli, are scholarship students. They don’t have a big house or a fancy boat, and they have to do extra community service to make up for their free tuition. So when bossy Edna Santos sets her sights on the new boy who happens to be Merci’s school-assigned Sunshine Buddy, Merci becomes the target of Edna’s jealousy. Things aren’t going well at home, either: Merci’s grandfather and most trusted ally, Lolo, has been acting strangely lately — forgetting important things, falling from his bike, and getting angry over nothing. No one in her family will tell Merci what’s going on, so she’s left to her own worries, while also feeling all on her own at school. In a coming-of-age tale full of humor and wisdom, award-winning author Meg Medina gets to the heart of the confusion and constant change that defines middle school — and the steadfast connection that defines family.

ABOUT THE AUTHOR:
Meg Medina is a Newbery Medal-winning Cuban-American author who writes picture books and middle-grade and young adult ﬁction. Her most recent young adult novel, Burn Baby Burn, has earned numerous distinctions, including being long-listed for the 2016 National Book Award and short-listed for the Kirkus Prize. She is the 2014 recipient of the Pura Belpré Author Award and a 2013 Cybils Award winner for her young adult novel Yaqui Delgado Wants to Kick Your Ass. She also received the 2012 Ezra Jack Keats New Writer Award for her picture book Tía Isa Wants a Car. Her other books are The Girl Who Could Silence the Wind, a 2013 Bank Street College Best Children's Book of the Year; Mango, Abuela, and Me, a 2016 Pura Belpré Honor Book; and Milagros: Girl from Away.

Meg Medina's work examines how cultures intersect through the eyes of young people, and she brings audiences stories that speak to both what is unique in Latino culture and qualities that are universal. Her favorite protagonists are strong girls. In March 2014, she was recognized as one of the CNN 10 Visionary Women in America. In November 2014, she was named one of Latino Stories' Top Ten Latino Authors to Watch.

When she is not writing, Meg Medina works on community projects that support girls, Latino youth, and literacy. She lives with her family in Richmond, Virginia.