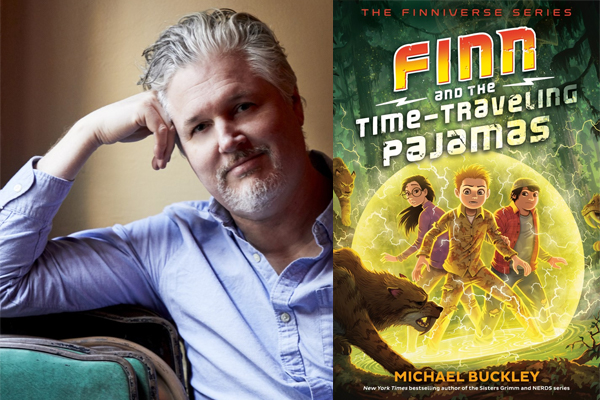 Put on your PJs and get ready for an adventure of a lifetime! Michael Buckley, the New York Times bestselling author of the SISTERS GRIMM and NERDS, celebrates the release of the second installment in his middle grade science fiction adventure series, FINN AND THE TIME-TRAVELING PAJAMAS, the sequel to FINN AND THE INTERGALACTIC LUNCHBOX. The book features monsters, holograms, and a whole bunch of action-packed fun! During this virtual event, Michael will be joined by DIARY OF A WIMPY KID author Jeff Kinney. The two will discuss the FINNIVERSE series and answer audience questions.

ABOUT THE BOOK:
From the New York Times bestselling author of the Sisters Grimm and NERDS comes the second book in an action-packed middle grade series with equal parts humor and heart!

When Finn is saved from the Time Rangers by an older version of himself, it comes with a catch. Old Man Finn needs Finn and his friends, Lincoln and Julep, to help him win battles he lost years ago against the Paradox, a terrible creatures obsessed with revenge against Finn's father. If they succeed, he promises to tell Finn where his father is. He even gives them a pair of time-traveling pajamas to help them with their quest.

There's only one problem. The pajamas malfunction almost immediately. Along the way the kids avoid being eaten by sabretooths, shot by revolutionary war soldiers, and start a war with a town full of holograms, all in an effort to fix the jammies.

Just when their goal is in sight, Julep gets sick. Only...it doesn't seem like she's sick. It seems like she's changing. The adventure may cost Finn more than an old pair of pajamas--it may cost him his friends!

ABOUT THE AUTHOR:
MICHAEL BUCKLEY is the New York Times bestselling author of the Sisters Grimm and NERDS series and the cocreator, writer, and executive producer of Cartoon Network's Robotomy. He lives in New York City. Visit Michael online at michaelbuckleywrites.com and follow him on Twitter at @michaelwbuckley and on Instagram at @buckleystopshere.

Finn and the Time-Traveling Pajamas (The Finniverse series #2) (Hardcover)

Finn and the Intergalactic Lunchbox (The Finniverse series #1) (Paperback)