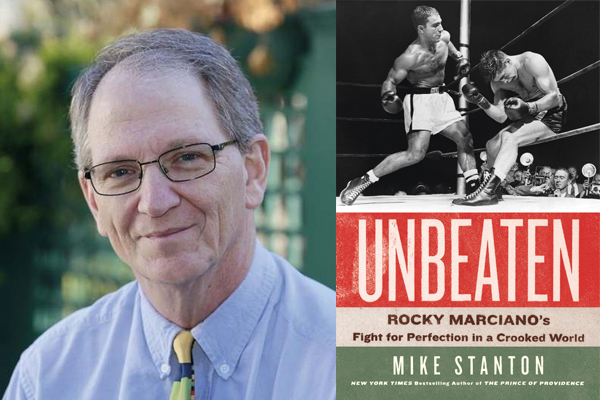 It’s a knockout! Award-winning journalist and biographer Mike Stanton is coming to An Unlikely Story to discuss UNBEATEN, his biography of Rocky Marciano, the greatest heavyweight champion of all time. At the event, Mike will talk about his book, the man behind all the wins, and the sport of boxing. A Q&A and book signing will follow.

ABOUT THE BOOK:
From the bestselling author of The Prince of Providence, a revelatory biography of Rocky Marciano, the greatest heavyweight champion of all time

The son of poor Italian immigrants, with short arms and stubby legs, Rocky Marciano accomplished a feat that eluded legendary heavyweight champions like Joe Louis, Jack Dempsey, Muhammad Ali, and Mike Tyson: He never lost a professional fight. His record was a perfect 49-0.

Unbeaten is the story of this remarkable champion who overcame injury, doubt, and the schemes of corrupt promoters to win the title in a bloody and epic battle with Jersey Joe Walcott in 1952. Rocky packed a devastating punch with an innocent nickname, “Suzie Q,” against which there was no defense. As the champ, he came to know presidents and movie stars—and the organized crime figures who dominated the sport, much to his growing disgust. He may have “stood out in boxing like a rose in a garbage dump,” as one sportswriter said, but he also fought his own private demons.

In the hands of the award-winning journalist and biographer Mike Stanton, Unbeaten is more than just a boxing story. It’s a classic American tale of immigrant dreams, exceptional talent wedded to exceptional ambitions, compromises in the service of a greater good, astounding success, disillusionment, and a quest to discover what it all meant. Like Suzie Q, it will knock you off your feet.

ABOUT THE AUTHOR:
Mike Stanton is the author of The Prince of Providence: The Rise and Fall of Buddy Cianci, America’s Most Notorious Mayor, which was a New York Times bestseller. He is an associate professor of journalism at the University of Connecticut, having previously headed the investigative team at the Providence Journal, where he shared a Pulitzer Prize. He lives in Rhode Island with his wife and two children.

Jacobs Beach: The Mob, the Garden and the Golden Age of Boxing (Paperback)