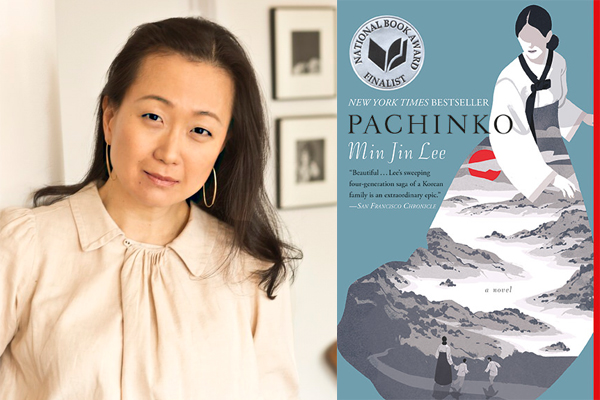 We are beyond delighted to welcome bestselling author Min Jin Lee for a discussion and book signing for her extraordinary novel, PACHINKO, a National Book Award Finalist. This thought provoking family saga follows the lives of members of a Korean family from 1910 to the late 1980's as they leave Korea to seek a better life in Japan. They will deal with poverty, prejudice and question their place in their new country.

Ticket price includes one (1) copy of PACHINKO and admission for two (2).

ABOUT THE BOOK:
In this gorgeous, page-turning saga, four generations of a poor Korean immigrant family fight to control their destiny in 20th-century Japan, exiled from a home they never knew.

"There could only be a few winners, and a lot of losers. And yet we played on, because we had hope that we might be the lucky ones."

In the early 1900s, teenaged Sunja, the adored daughter of a crippled fisherman, falls for a wealthy stranger at the seashore near her home in Korea. He promises her the world, but when she discovers she is pregnant--and that her lover is married--she refuses to be bought. Instead, she accepts an offer of marriage from a gentle, sickly minister passing through on his way to Japan. But her decision to abandon her home, and to reject her son's powerful father, sets off a dramatic saga that will echo down through the generations.

Richly told and profoundly moving, Pachinko is a story of love, sacrifice, ambition, and loyalty. From bustling street markets to the halls of Japan's finest universities to the pachinko parlors of the criminal underworld, Lee's complex and passionate characters--strong, stubborn women, devoted sisters and sons, fathers shaken by moral crisis--survive and thrive against the indifferent arc of history.

ABOUT THE AUTHOR:
Min Jin Lee is a recipient of fellowships in Fiction from the Guggenheim Foundation (2018) and the Radcliffe Institute of Advanced Study at Harvard (2018-2019). Her novel Pachinko (2017) was a finalist for the National Book Award for Fiction, a runner-up for the Dayton Literary Peace Prize, and a New York Times 10 Best Books of 2017. A New York Times Bestseller, Pachinko was also a Top 10 Books of the Year for BBC, Canadian Broadcasting Corporation, and the New York Public Library. Pachinko was a selection for “Now Read This,” the joint book club of PBS NewsHour and The New York Times. It was on over 75 best books of the year lists, including NPR, PBS, and CNN. Pachinko will be translated into 24 languages. Lee’s debut novel Free Food for Millionaires (2007) was a Top 10 Books of the Year for The Times of London, NPR’s Fresh Air, USA Today, and a national bestseller. Her writings have appeared in The New Yorker, NPR’s Selected Shorts, One Story, The New York Review of Books, The New York Times Magazine, The New York Times Book Review, The Times Literary Supplement, The Guardian, Conde Nast Traveler, The Times of London, and Wall Street Journal. She served three consecutive seasons as a Morning Forum columnist of the Chosun Ilbo of South Korea. In 2018, Lee was named as an Adweek Creative 100 for being one of the “10 Writers and Editors Who are Changing the National Conversation” and a Frederick Douglass 200. She received an honorary degree of Doctor of Humane Letters from Monmouth College. She will be a Writer-in-Residence at Amherst College from 2019-2022.